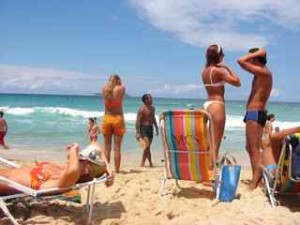 Early evening, the sun’s still bright, Bahia’s perpetual sea breeze cuts the humidity. At an outdoor café in the bohemian barrio of Rio Vermelho, two dozen stylish international professionals-New York gallery owners, Algerian D.J.’s, French models-are squeezed along a lopsided sidewalk laughing and drinking beer served estupidamente gelada, or “stupidly cold.” My companion, Camille, a doctor from Rio, is telling me how the vibe here is even more relaxed than in her own famously laid-back city when a downpour begins. Then, the sound of drums. A band of Bahian drummers, a bateria, appears from around the corner. Soaked and shirtless, they are some two dozen young men with lean torsos and joyous faces marching down the street, banging out a rhythm improvised around the thrum of the rain, their instruments exploding with water at every strike. They pass slowly, headed toward the Atlantic, and the instant the music goes silent, the rain also stops. The timing is eerie. But then, after a short while in Bahia, one gets used to magic.

In 2002, George W. Bush asked Brazil’s then-president, Enrique Cardozo, “Do you have blacks, too?” The resounding answer is the northeast state of Bahia and its capital city, Salvador de Bahia-the grand synthesis of Afro-Brazilian culture, and a must-have passport stamp for the trend-conscious travel set. If São Paulo translates into New York’s fashion and frenzy, and Rio to L.A.’s glam plasticity, then Salvador is Miami’s music, sensuality, and mysticism.

Salvador was Brazil’s first capital, a major port city built on the wealth of sugar and slaves. For this, it’s worth taking a day to explore the once-wealthy Pelourinho district and its hilly cobblestone streets, where colonial buildings have faded somewhat, but the pastel-colored walls retain a sagging charm. The martial-art-cum-dance of capoeira, born here, is improvised on corners, and the once-banned religion of Candomble-African spirituality melded with Catholic iconography-is now practiced in open light (the curious can visit a terreiro, or Candomble house).

But Bahia’s unofficial religion is music. World musicians from Angélique Kidjo to Elvis Crespo to Björk come here to incorporate the sounds of axé or pagoda, and famous sons include the Dylan-esque Gilberto Gil, now the country’s Culture minister, and his sixties recording partner Caetano Veloso.

On nearly every street corner, black women in dazzling white dresses sell piquant Bahian specialties like acarajé, a cake of crushed beans, and vatapá, a spicy fish dish. A few locals’ homes became so popular with neighbors that they were forced into restaurant-hood. Ask a taxi driver to whisk you to Beto Pimentel’s home restaurant, Paraiso Tropical. The humble backyard once hosted cockfights-now it’s the alfresco site of one of the best meals in the city.

A few days into our stay, Camille and I caught a taxi-ferry-bus-boat transfer to the village of Morro de São Paulo, on the neighboring island of Tinhare. Two hours from Salvador, Morro is a tiny happy village laid along four beaches, each more deserted than the next. Cars are banned, so visitors’ bags are transported to small seaside motels in wheelbarrows. Not long after we arrived, locals began to set up the nightly beach party. A forró band unpacked, and card tables were piled with local fruits-acai, maracuja, graviola-to be blended with the cane alcohol cachaça. The moon rose over the Atlantic, casting everything in soft white light. Soon, magic.