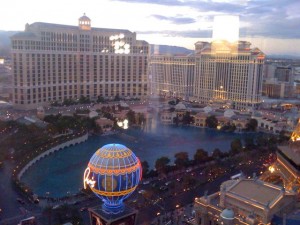 Room with a View: From our Planet Hollywood perch

Jan. 7 (Bloomberg) — “Viva Las Vegas,” “Showgirls,” “Very Bad Things,” “The Hangover,” “Leaving Las Vegas.” All classic movies about Sin City and a fair representation of the Boys Weekend three friends and I had before the Christmas holidays.

It’s a ritual we have every year in a different place and it was a fait accompli, both unoriginal and inevitable, that it would eventually come to Vegas. Besides, with the incredible volume of hotel rooms — more than 145,000 — and friendly prices to fill them, 2009 was especially enticing.

Discounts are even better in the so-called shoulder seasons including January and February, when fewer tourists hit Vegas, according to data from the Las Vegas Convention and Visitors Authority. Last year, hotel occupancy fell in every month from the prior year through October, the latest month for which statistics have been published, including a 13 percent decline in January from the same month in 2008.

A new enticement is last month’s opening of the much- ballyhooed 18 million-square-foot CityCenter, which includes a Mandarin Oriental hotel, shopping enclave and the 4,004-room hotel/casino Aria, where rates in January and February are as low as $149 a night.

Located on the Strip, Aria was not yet open when we arrived, so we took a perch across the street at the 3-year-old Planet Hollywood, a 52-story hotel and casino. The property’s new PH Tower by Westgate, with a mixture of 1,200 timeshares and rooms, opened late last month. For January, Internet rates on basic Planet Hollywood rooms start at $79 a night, with “Strip Suites” from $229.

Initial concerns that the hotel would be a Hollywood- inspired pastiche fueled by a Bruce Willis “Die Hard” aesthetic were unfounded. The overall ambience is surprisingly posh, with lots of sleek materials and an even sleeker, young clientele.

As friends who’ve known one another since our first year in college (three of us are named Jason), we opted for a two- bedroom suite on the 33rd floor, which offered a prime view of the Bellagio’s famous fountains.

Our man cave had a massive, if dim, living room, replete with an air-hockey table and a phalanx of flat-screen TVs which glistened like mirrors. We also had a wet bar and a banquette designed for in-suite poker games.

Black was the room’s primary color and pseudo-art photos of red-carpet Hollywood events decorated the walls. The rooms were large, with comfy beds, big bathrooms and oversize terry robes.

Any good Las Vegas trip is all about nighttime play. I had assumed the poor economy would leave the town quiet, but in part because it was a weekend featuring a primetime boxing match and partly just because it was Vegas, the town was swarming.

Restaurants from N9NE Steakhouse to Joel Robuchon were packed. (“Do you have a reservation, gentlemen? No? May we suggest Subway?”)

Fortunately we’d taken more care with nightclub reservations than we had for dining, and on Friday night we made our way to Steve Wynn’s Encore and its XS nightclub.

At some 40,000 square feet, XS is split between an al fresco flirt-and-sip scene surrounding the swimming pool and the grind-and-shimmy setting inside. Interior design relies heavily on gold finishes, shimmering chandeliers and nearly naked, showgirl-worthy dancers.

If you’re really looking to impress a special member of the writhing clientele, the club’s signature $10,000 Ono cocktail is a combination of 30-plus-year-old Champagne and rare cognac, plus gold cuff links and a diamond-and-pearl necklace. (What, your drinks don’t come with jewelry?)

The next night we choose a more intimate option, LAVO at the Palazzo Resort. There’s an Italian restaurant downstairs, which we ignored. As we made our way up the stairs, the bathhouse theme became evident, with two female employees scrubbing each other down in a tub near the entrance.

Vegas, you subtle creature you.

Inside, we found a large marble bar, lots of nooks and crannies with good seating for people watching, and a sexy crowd dancing to a mix of ‘80s classics and modern hip hop.

A security guy stopped by our table and introduced himself (“If you gentlemen have any trouble, just let me know.”). I first assumed he had identified us as the potential trouble, but I soon found that LAVO has the most courteous nightclub staff I’ve ever encountered. Everyone from the servers to the bathroom attendants were genuinely warm, making for a welcoming vibe.

Late into the night, after making it back to the Planet Hollywood, it was time for my own very bad thing. I was fuzzy enough to feel the craps tables calling to me. I was soon reminded why the city can still have 145,000 rooms even in dire times. The odds still aren’t in your favor.

I returned to my room at 7 a.m., pockets outturned, and relieved that, in a few hours, I would be leaving Las Vegas.