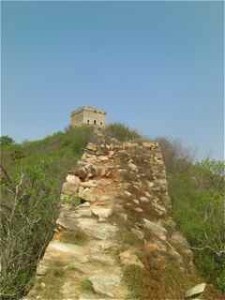 May 7 (Bloomberg) — Escape from Beijing: That’s the plan. All week the capital has been beset by a thick scrim of pollution, followed by rain, then more thick haze. I’m shocked that I never see the sun for five straight days. So I hire a driver and flee north. 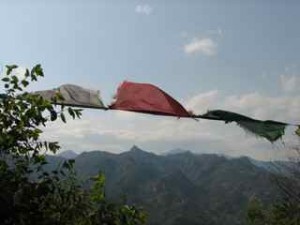 Two hours later, I’m hiking along a rough-and-tumble part of the Great Wall, high above the haze and completely alone. On any good trip there’s a crystalline moment when it’s all worth it, and this is mine.

Sanctuary comes via the utterly charming Red Capital Ranch, one of two properties where I’ll stay outside the city. Each has its own access to China’s serpentine landmark, the best way to evade the tourist hordes. 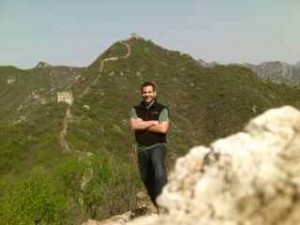 Located in a valley of the Huairou mountains, where emperors also escaped Beijing, the “ranch” is actually 10 bungalows built along a lazy river. Styled after Manchurian hunting lodges, they feature reclaimed materials from demolished Beijing homes, with walls, antiques and statutes rich in detail and character.

There’s also a restaurant with surprisingly tasty fare (the Mongolian beef is better than any I’ve had in Mongolia), a bar with a fireplace, and a tiny spa and sauna, all tended by a kind Tibetan staff. 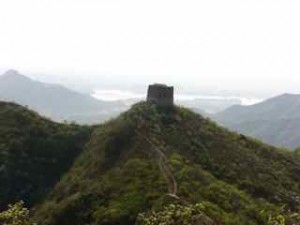 The Great Wall runs along the mountains on both sides of the valley and guests can hike up either side. This section was built during the Ming Dynasty (1360s to 1640s), and it’s rough and unreconstructed. That’s a world away from rebuilt sections like Badaling, where Nixon visited — and where guests must buy tickets and fend off hawkers.

I’m up early, am handed a packed lunch and head for the hills. The slope is at first gradual, then quickly gains altitude as the wall follows the spine of the highest, sharpest ridges. It’s easiest to walk on top of the wall. I pick up a castoff bamboo walking stick and never see another soul.

Every 20 minutes I reach another square watchtower, about 20 feet tall and made of cut stone and brick. Clamber inside high gaping doorways, and you’ll find vaulted ceilings and windows and archery slits with 360-degree views. You can imagine the guards who stayed up here, on the tiresome, eternal lookout for Mongolian invaders.

In the rougher points of the mountain, the wall occasionally dwindles into little more than rock piles. At one place, the wall seems to have toppled as it snaked down a rock face, making for a hazardous and slick descent, with precipitous, 50-foot drops on each side. While negotiating the flat rock face, I grab a thorny bush that slices my arms — better than the alternative.

By the time I reach the 10th guard post, hours later, my legs are wobbly and it’s time to stop. I climb to the tower’s crenellated roof and the world opens around me. To the south, Beijing is lost to haze.

The wall’s path also becomes unclear, disappearing into thick undergrowth and impossibly high, narrow mountain crags. The next watchtower is balanced atop a vertiginous cliff, where I suspect no one has passed in a long time. Beyond that, though, the wall can be seen zigzagging along even the farthest mountain ranges.

I sit down to my lunch of sesame-coated peanuts, ham sandwich and still-cool “Five Star All Malt” beer, a solitary mini celebration.

My next destination is Commune by the Great Wall, a luxe property managed by the Kempinski AG hotel group. It’s about 90 minutes’ drive northwest of the city, close to the tourist- crowded (and rebuilt) sections of the wall. A portion falls on Commune’s property and can be accessed only from the resort. This is the type of tall, fortified wall we see in photos, and a modern guard post separates the public section from Commune’s, with a red-lettered sign warning, “The tourist halts.”

Commune, tucked into a fold of the Shuiguan mountains, has 236 rooms among 42 villas. The buildings are based on designs by 12 Asian architects and range from the “Cantilever House” (which is) to the Miami Vice-esque, all-white “Shared House.”

They look awfully cool, yet each has four to six bedrooms and a large shared space, with kitchen, dining and living rooms. The problem is you never know who else might be staying in the shared space (see under: college roommates). The wall between my bathroom and the one next door isn’t thick enough to keep out unpleasant sounds of a man caterwauling loudly in the shower.

My aching legs earn me a 90-minute sports massage in the large Anantara spa, administered by a very small Chinese woman with hands that could crush rock. At less than $100, it’s a steal.

Tomorrow I’ll repound my legs into a wobbly state during an early-morning trail run astride the Great Wall. Where else can you do that?

For the moment, though, I’m sitting outside, drinking a single-malt scotch and watching the setting sun light up the wall in a soft golden glow. Beijing, I don’t miss you at all.