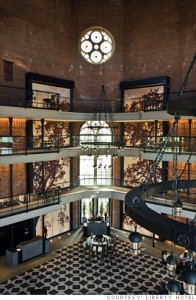 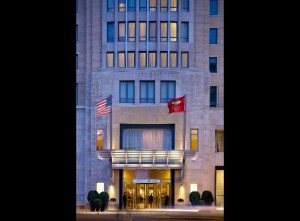 Dec. 30 (Bloomberg) — Boston can be confusing and cold in winter, and it’s all too easy to become lost on its winding, historic roads. So it’s a fine thing to pull up on busy Boylston Street, where parking spaces are fought over like the World Series, and be happily accommodated by the Mandarin Oriental hotel’s valet. After nine years and some $300 million of development, the 148-room Mandarin opened in October, bringing the Asian-style service the chain is known for.

Service is a tricky thing for a brand-new hotel. It’s often dependent on management’s ability to poach personnel from other properties. My plan is to see if they can pull off Mandarin- worthy service in several months.

On a busy Friday, two hours before the official 3 p.m. check-in time, we leave our bags in the car and ask the front desk to have our luggage brought up to the room and unpacked. We also ask for a pair of dress shoes to be shined before evening.

It’s the kind of request that sometimes befuddles even veteran front-desk attendants, though here the young woman behind the desk flashes a smile and simply says, “Of course.”

We return to find our clothes neatly hung or folded into drawers, and my black shoes have a lacquer-like sheen. When I booked the least-expensive available room on the Internet (at $475), I also asked that the room have six champagne flutes and all junk food be removed from the minibar. Done and done.

Our 410-square-foot room with king-size bed fits a writing desk with two chairs and a curved couch that sits against a bank of windows overlooking Boylston. The 42-inch Philips flat-panel TV transforms the space into a mini-theater.

Otherwise there are two inoffensive abstract paintings and a big bathroom with tub, separate toilet area and rain shower. The bed is wide and the linens Frette, with oversize pillows.

The location is close to shopping on Newbury Street, the bars on Boylston, and is connected to Prudential Center.

The problem with luxury chains, a trait shared by Four Seasons and Ritz-Carlton, is a certain corporate homogeneity. We could easily have been in Singapore, Munich or Bermuda rather than Beantown. The new 14-story building is unremarkable, and its size on otherwise smaller-scaled Boylston has irked some locals.

It’s also not a budget option. The final cost — after taxes, $45 valet parking and room-service breakfast — was $645.

If the Mandarin has no local history, Boston’s other notable new lodging has 150 years’ worth: The Liberty Hotel was once the Charles Street Jail. Opened in September 2007, the Liberty is a design-oriented hotel with a great back story. It’s already become a Boston hot spot.

The granite edifice sits near Beacon Hill overlooking the Charles River, an imposing structure that began life in 1851 and functioned as a lockup until 1990. The $140 million project started in 2005 and included a new 16-story building where most of the 298 guest rooms are located.

The hotel’s most winning element is the lobby in the original building — an airy space dominated by a massive domed cupola almost 100 feet overhead. Interior catwalks encircle it, firmly echoing the prison-block layout. Exposed brick walls and the occasional iron bars are also motifs.

Forget granite or interior brick walls in the new tower, where materials lean toward modern and inexpensive. Our $355-a- night “spectacular king” is actually a bland, 400-square-foot box with an odd palette of whites, grays and pinkish beiges. There are almost no other elements to jazz up the place, and it loses the war of the flat-screen TVs with a 32-inch model.

The two redeeming qualities are the comfy king bed and the 12th-story view of the Charles River. (Runners will adore the easy access to the Esplanade.)

The bathroom is smaller than the Mandarin’s, though the Molton Brown amenities are welcome. Final cost, including $42 valet parking and breakfast, is $521.

At check-in I request a table reservation at the bar, Alibi. The attendant takes my cell phone number yet never calls back. Later I go to Alibi myself and am told Saturday nights are bottle service only (how 2006) and “reservations are usually booked weeks ahead.” A poor policy for actual hotel guests.

I speak to the concierge and then a bar manager and am finally promised a table at the separate lobby bar at 11 p.m. We’re offered complimentary car service to our next destination at the Boston Symphony, a nice amenity.

At 11 p.m. we find the lobby’s cell block dancing to jailhouse rock. The place is packed with a young local crowd flirting and talking over the music. (We have to show our room key to get in.)

Once at our table, we get good service and a prime view of the friendly and non-aggressive scene, with lots of skirt flipping and tipping of martinis. Worth the effort. And what a transformation! If only the former convicts could see the old fortress now.

Spa? 16,000 square feet with extensive treatments and a small gym.

Best amenity: The cool lobby and its nighttime scene.

Bathrooms: Handsome but not large, with Molton Brown products.

Spa: None, though in-room treatments can be arranged.

(Jason H. Harper writes about travel and autos for Bloomberg News. The opinions expressed are his own.)