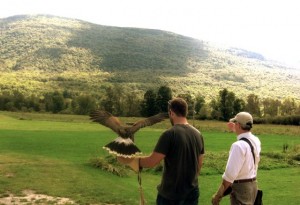 Sept. 24 (Bloomberg) — Dude, that hawk is swooping right at my head. Flared feathers and enormous black talons, dropping fast. Beak open, he snatches a strip of meat out of my gloved hand and then settles onto my wrist, regarding me with sharp eyes.

I’m taking a falconry lesson, the age-old art of hunting game with birds of prey. It’s a compelling way to while away an afternoon in the natural splendor of southwest Vermont, especially as leaf-peeping season approaches.

I’ve made my way to see the changes at the Equinox resort, which recently got new owners, HEI Hotels & Resorts, and $20 million in renovations. It’s a famous old New England dame, opened in 1769, though the last time I stayed it was showing wrinkles in terms of decor, service and food.

At the base of 3,800-foot Mount Equinox, in Manchester Village, the property is a ramble of three-story white buildings with tall columns and green shutters. HEI also bought up two smaller neighboring properties, the Charles Orvis Inn and the 1811 House, with 195 rooms in all.

As one can expect from a historic property, little can be done for the bathrooms, which run to the smallish side and have low ceilings. Better to head to the 13,000-square-foot spa if you want to luxuriate around in your bathrobe.

The rooms aren’t the main draw, however. It’s that location, with its small-town charm and tart mountain air. The Equinox excels as a place to keep you entertained — even if you’re a couple who shares precious few common interests.

Which is not to say the adventures break down into gender cliches. I saw troops of women at the par-71, 18-hole golf course and gaggles of men at the spa.

The list of activities, both organized and not-so, quickly runs to the exhausting. Would-be outdoorsmen are served at the Orvis Fly Fishing School and Orvis Shooting School, where you can blast shotguns at clay pigeons. (Activities carry extra charges; a one-day fly-fishing course is $350 per guest, for instance.)

The British School of Falconry, several miles off the resort, is a prime example of the not-so-standard programs. Guests handle Harris hawks, setting them off to fly and calling them back. When in season, they can hunt pheasant or rabbit with gregarious and charming handler Robert Waite. There’s something beguiling about having a bird of such beauty and power balancing on your arm.

As an auto columnist, I was also drawn to Equinox’s Land Rover Experience Driving School. It provides stock $80,000 Range Rovers and $50,000 LR3s for an 80-acre off-road obstacle course of boulder patches, steep hills and deep ruts. I spent two hours with a lead instructor, Josh Williams, bumping along thick backwoods in low range.

I’m no novice, but I picked up several tricks and was reminded of all that I still need to learn. (Forget those Jeep commercials where they bash over all the obstacles at speed — this is a slow-motion art.)

What both Josh at Land Rover and Rob at the falconry school seem to share are deep wells of experience and genuine passions for teaching. It’s the best kind of service.

After swooping birds and bouncing wheels — and significant credit-card damage at the Manchester Village outlets, which include Escada, Giorgio Armani and Brooks Brothers — I’m happy to put my feet up with a drink.

Equinox has a handful of eating options, and we make for the fine-dining-oriented Chop House. The dining room is simplicity bordering on austerity, yet the martinis are big-city good and I order the prime New York strip with high hopes.

While I’ve had a string of sorry steaks lately, this one arrives well-seared and juicy, if just slightly more than medium rare. Still, it’s hands-down the best steak I’ve had in a while. Afterward, we head to the Falcon Bar’s outside patio and fire pit for chocolates and Port.

Service is gracious and warmhearted, if more than occasionally the staff forgets to bring water or refill coffee cups. Management may still be fine-tuning the overall experience — from rooms to service — yet it’s already far better than I recall from previous visits.

Ultimately, it’s an easy place to like — nice but not ostentatious. You can dress up for dinner, though you don’t have to. You can take a stroll around Equinox Pond, but that chair in the early fall sun looks promising, too.

And you may find yourself, as I did, plotting more days. There’s the archery program, and I’d like to climb the summit of Mount Equinox. And I’ve never tried several of those Scotches on the menu.

Best amenity: The sheer diversity of outdoor pursuits, from the falconry school to shopping nearby.

Price: Superior rooms from $599 (though cheaper deals can be found on the resort’s Web site).