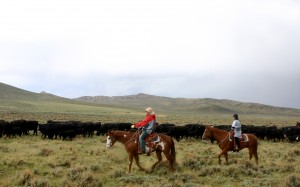 The riders are kicking up plumes of dust in the distance, silhouettes backlit against the expanse of bald plain and comb-over scrub brush. Hooves make small explosions in the dry dirt as the wranglers blitzkrieg after runaway cows. The sound of mothers bleating for calves floats back to us on a light, cold breeze. I’m atop my own horse, impatience blooming. Our group-a collection of expectant faces topped with mint-new cowboy hats-has been stuck with guard duty, eight newbies forming an equine barricade around a dozen cows and calves. One calf is doing a slow circle around its sad-eyed mother, going nowhere. This is killing me. I’m not built for patience, and neither is Apache, my not so imaginatively named paint horse. His ears are antennaed to where the action is. Bill, the head wrangler, lopes up, bringing in four more head. He’s a sun-aged, bristle-mustached ranch vet with happy blue eyes and an easy-going way. Our group respects him. He directs us to begin the slow dance of pushing the cows across the range, over a paved road, to a fenced-in field. I give my horse a disappointed tap with my Tony Lamas. “Jason,” Bill says, “you come with me.” He points out two cows with calves in the distance, where the real cowboying-it’s used as a verb out here-is going on. “Let’s get them.” I put exultant heels to horse. Apache loves to run.

We’re “pairing” today, a process of separating mothers and newborn calves from the herd so that the calves can later be branded. I am one of a dozen guests at the Hideout at Flitner Ranch in northern Wyoming. This is our first real day cowboying. Yesterday in the corral, we got a lesson in “cow psychology,” the process of using cattle’s ingrained flight response to get them to go where you want. Basically, you position yourself in the opposite direction and spook them the other way. Sounds simple but nuances abound, particularly since cattle like to stop short and duck back or dart laterally across your horse’s path. Bovine doesn’t always mean slow and stupid, we’re learning. Stupid, sure, but these suckers can haul. 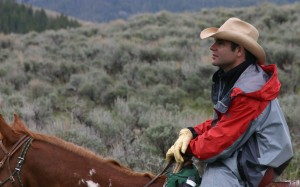 I cull the big mother and bleating calf from the calfless group, aiming them toward the barbed-wire fence. Earlier, I’d ridden between a bunch of cows and the fence, and Bill had hollered out, “Try not to do that. If the boss catches you between the fence and cows, he’ll yell that the fence is doing its job, you better get to yours.”

My cow bolts, breaking hard left toward open plain. Apache knows his job even if I don’t, and we’re suddenly galloping to cut her off. I’m too slow, and the cow beats us to the open space, tail whipping the air. Apache, without any urging, puts on more speed, giving chase. We’re bounding over hills, cactuses, rocks, and I’m powerless to stop the valiant run. We’re rushing toward a deep, dry wash, and my boots are coming out of the stirrups. Bill is counting on me, I think. This is in your blood, I think. You should be good at this.
The cow is getting away.

One boot comes free from the stirrup, and I’m leaning dangerously in the saddle. Hell. I yank on the reins and Apache is bellowing-it’s nothing like a neigh-and I’m pulling for all I’m worth and I’m looking for a good spot to land that isn’t cactus or rocks and I think I’ve taken falls from a horse before and it’s been all right and …. Apache gives it the hell up and comes to a sudden stop, his withers rising up and down and up and down. Lather soaks my pant leg. I’m still in the saddle, but the cow is only a funnel of distant dust. I feel miserable.

My cowboy story doesn’t begin with my week at the Hideout. It doesn’t even begin with me.

My family is from a desert valley in northern New Mexico. My great-grandfather bought what would become the Harper Ranch in 1907, after traveling from Missouri by wagon train. He immediately purchased his first cattle. My granddad, John Harrington Harper, known as J. H., was born in the bedroom of that ranch house in 1914. Almost seventy-nine years later, he would die of a heart attack two rooms away, slicing bread in the kitchen early in the morning. Granddad, who was always annoyed at my late-sleeping ways when there was work to be done, which there always was, jokingly condemned, “People die in bed.” He, no surprise, did not.

If every family has its hero, Granddad was ours. He was a gentle, quiet guy who had a tremendous romance with his wife. He was also a cowboy in the finest sense of the word, without affectations, a man’s man without machismo-a Louis L’Amour guy. A great campfire cook (campfire biscuits made straight out of a flour sack), he had a knack for fixing anything with ingenuity and baling wire (yesteryear’s duct tape) and could split barbed wire with a rifle shot.