It’s been a stressful year. The whole world needs a vacation. Which means not just any escape will do. You want small, you want secluded, and you want sand? You want what Jason Harper found on three little islands 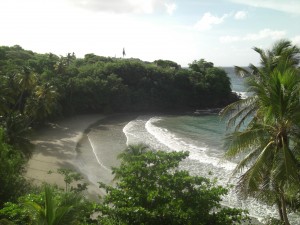 It starts immediately. The Caribbean has a tendency to announce itself as soon as you exit the airplane. In the British Virgins, I’m greeted by riots of greenery, the smells of cooking meat, and the warm hug of wet heat. Here it is impossible to live in more than a single state of mind. Al Qaeda who?

Yes, I am escaping-a temporary solution, since escapes can’t last forever and bad news seems to. But sometime last year, the zeitgeist got to me and I decided that it was time to get lost. Real lost. Someplace with daily papers and satellite dishes, but where I could seek news out rather than be swamped by it. I needed to be cut off just long enough for some soul rejuvenation.

So I headed to the Caribbean. It is backyard-close and I had only eight days to spare. The islands are ideal for another reason as well. With lots of boutique hotels on lots of pretty little beaches, the Caribbean delivers privacy and more. Its people share in that rare and wonderful careless use of time that comes with life lived in the sun.

While I’m at the Beef Island airport, I am invited to get some ‘knickknacks’ at a free outdoor buffet. It’s a party for the opening of the post office in the terminal. Sitting on the curb with my legs in the empty street, I eat delicious chicken wings and sweetbreads served by a woman in her Sunday best (it’s Monday). She tells me that I’ve missed the other party today, the one for the ‘opening’ of a new traffic light in town. A big day on Beef Island.

I’m headed for Peter Island, a posh private getaway for moneyed Americans and Brits. The resort’s yacht picks me up-along with two couples, one from Britain and one from Arkansas-and soon we’re crashing through ocean spray while drinking Carib beer on the top deck. As the sun tumbles behind the backbone of steep hills, we make land on Peter Island, where the resort’s fifty-four rooms are the only game in-well, there is no town. The assorted cottages, buildings, restaurants, and pool are spread between Great Harbour and a curled slice of beach on Deadman’s Bay, all on the leeward side.

I’m shown to a room in a series of two-story A-frames that do not offer beach access but are ‘ocean view’-a subtle invitation to get out and enjoy the island. Which I do the next morning with an early run. If you want to break a sweat exercising in the Caribbean, do it well before 9 a.m. The large hill behind the resort is deceptively steep, and as I follow the narrow switchback road that is mostly the domain of employee golf carts, the sun becomes my tormentor, not my friend. When I finally reach the crest-victory!-it affords a brilliant view of the entire island. As I stop to breathe, a dozen wild goats break out from the thick underbrush. One character, the leader, assesses me for a moment, standing aggressively over his harem. No worries, old man. I point my sneakers downhill toward White Bay Beach. Peter Island is eight miles long and a mere half mile wide, so White Bay isn’t far, if you can get over that cursed hill. The green-swathed slopes of St. John are visible on the horizon as I collapse onto the deserted beach and dunk my head in the water.
I retrace my weary steps in time to take an excellent tour of the island given by Hugh Benjamin, whose patois commentary is peppered with remarks about how he hopes to one day see the snows of Colorado. It is from him that I learn of the Smiths, Peter Island’s last remaining natives. They live just a hop and a skip from the resort, and after the van tour, I go looking for them. I find Conrad Smith sitting on his front steps, drinking an Amstel Light and fiddling with the blade of a pocketknife. He has the bulbous hands of a laborer, and his eyes are coated with a film of gray. He worked for the resort until near blindness overcame him. The Smiths’ humble house sits in a burst of brambles and turpentine trees just off the water’s edge on Great Harbour. Five yachts bob nearby. It is spectacular. Presently, Conrad yells for his sister, Laurie, who’s more the talker in the family.

There used to be a village of almost 150 people, Laurie tells me, but the island became drier over the years and many moved to Tortola. Laurie is one for a saucy story, and she takes great delight in telling me about an island man who was caught late at night with a woman on the floor of the resort’s alfresco bar, pants down. ‘It was thought best if he moved off island. Dogs ‘n’ cats had more shame than that man,’ she says, laughing. ‘The last resident other than us died three years ago.’

Conrad shakes his head. ‘Laurie, she died seven years ago.’

‘Seven? Lord, how time goes.’ She is quiet for a rare moment, perhaps contemplating her own fate, perhaps more, because she adds, ‘It don’t get more beautiful than here in the islands, except maybe in heaven.’

With the islanders gone, most of the staff live on Tortola, and their easy hospitality turns out to be one of my favorite aspects of the island. The management has created an environment of good service without inhibiting the staff’s natural loquaciousness. My only problem is not their fault. I am a single guy on an island of couples, for couples. My glaring singleness throws the workers. At lunch, I ask for a table for one at Deadman’s Beach Bar & Grill, an open-air restaurant on the beach. The hostess pauses. ‘Two?’

She smiles but looks over my shoulder. ‘Where’s your wife?’

Sigh. When I get it across that no, it really is just me, she asks if I’d like to sit near the back. Thanks, but no.

I have a flaky swordfish with papaya relish, and Jean Kelly Peters, another staffer who’s been at the resort since the ’80s, swishes over and visits away the solitary stigma.

After lunch, I take off in one of the open-sea kayaks, paddling away from all the lounging happy couples on the beach. Deadman’s Bay is bound by two sets of rocks, and I’m told not to go beyond them. I paddle as far out as I’m allowed, and then a bit farther, into the roil of bigger waves. I’m testing myself, sluicing through the surf, working the muscles in my back. I grew up in New Mexico-‘all beach, no ocean’ goes my joke-so I’ve never quite understood the sea’s ebb and flow. Finally satisfied that I’ve fulfilled my manly man’s tackling-of-nature duties, I turn the bow toward the far rocks and lie back in the kayak, letting the swells push me along. Deadman’s Bay Beach is spread out before me in a stunning panorama. I spy a movement underwater as a dark shape speeds just below the surface. It is a huge sea turtle.
On my last evening I tackle my favorite hill anew, hiking toward the crystalline night sky like a trespassing constellation. The stars are thick upon my head. I’ve spent the entire day by myself, mountain biking and snorkeling, and the serene coolness that comes with being alone but not lonely has settled into my body. I’ve stopped listening for my cell phone. And even though I’m wandering in complete blackness on a foreign island, I feel no danger. Still, if I were part of a couple right now, I’d head right off this hill and sneak onto the beach to re-create Laurie Smith’s tale. Oh well, next time.

American to the core, I’m a freak for driving, equating it with freedom. I’m fierce-grinning as I charge around St. Barts in a Mighty Mouse-like Suzuki Sidekick. Though this French island is only eight miles wide, it is blessed with twenty-five miles of narrow, curving roads. Other than the very cool Smart cars (where do they stash the engines in those tiny bodies?), the Suzukis are ubiquitous, so I’m not outgunned as I grind up steep hills with first gear screaming (second gear is gutless). I speed easily along with the other traffic. Driving in different lands is kind of like being a player in a symphony: It’s best to keep up so as not to get knocked from the composition altogether.

I’m a firm believer in the adage that getting lost is always the best way to discover a place. On the far side of the island, on the extreme northwest coast, I follow an asphalt road that tops the highest point. The world around me is a study in blue. Overhead the sky is a saturated navy, but as my eyes track downward, the color bleeds out until it blends with the filmy azure of water far below.

On my sketchy map, this road becomes a dotted line, and sure enough, soon turns into a footpath. No go. But somehow I’ve got to get from up here to down there, back to my beach hotel. I spy a road no wider than the Subaru, but heading in the other direction, toward the ocean. What’s the worst that can happen? So I shift into low gear, turn around, and follow. The angle of descent is extreme, and the truck skitters down with all the weight on the front tires. I don’t know what the choreography, let alone the etiquette, might be if I should happen to meet someone coming the other way. But my luck holds, and several minutes later I lurch onto the coastal road and find I’m no more than a hundred yards from my hotel.

The Hôtel St-Barth Isle de France, a delightful thirty-three-room enclave sprawled on Anse des Flamands, is out of the way without being way out: Gustavia is only a ten-minute drive away, so guests are removed from the tourist bustle without being divorced from the island’s vibrancy. Owned by an English couple who live on the island, it is serviced by a charming staff of French, Brits, and Americans, all of whom share a light touch and a knowledge of St. Barts. They deliver what I’m in search of. In fact, each of the small beach hotels I visit on this short three-island trip proves, in its way, ideal for snapping one’s leash to the world and all its net-and-cell connectivity and living in the right here, right now.
If you’re coming from anywhere else in the islands, St. Barts is a surprise. The lack of black culture is jarring, giving the visitor a sense of displacement-it stands the Caribbean vibe on its ear. But the intermingling of French workers and American visitors is intriguing; neither are exactly on home territory, so maybe it’s an arena, welcome these days, for a neutral clash of cultures-affluent ones. A mammoth three-story yacht dwarfs the buildings along Gustavia Harbor, a token of the island’s immense but almost haphazard wealth. A guy who looks like the sea captain from The Simpsons is loafing nearby, and I ask him who owns the behemoth. Somebody famous, I’m thinking. The man simply shrugs and says in a salt-crackled voice: ‘You can rent it if you like.’ Oh. Of course you can.

Perhaps I’m a bit out of my element.

I wend my way toward small Shell Be