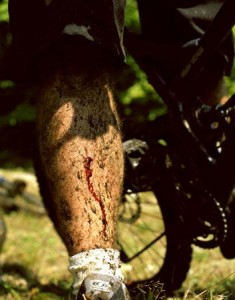 So, this is how it’s gonna be. I will be the rock eater, the Curly to the mountain’s Moe. Today, it seems, I’m going to be voted Most Likely To Bleed.

We’ve all been there-you get together a competitive group (usually dudes) for a challenging day down the slopes, and a high-school gym-class pecking order soon asserts itself. There’s the gungho leaders hucking down the cliffs and shooting through the trees; then the middle-ground contingent who keep up, but a little less spectacularly; and then, well, there’s the guy who’s destined to eat it. Repeatedly. 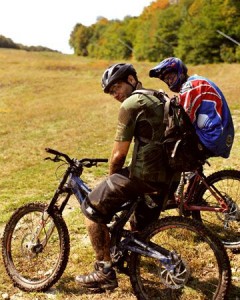 The difference is, this day, we’re not looking at downing into a Downey-like, Snuggle Bear-fluffy bounty of nature’s soft stuff-the type of delightful powder that calls out for you to go down in it facedown. No, it’s six months into the wrong season. Our crew is downhill mountain biking in Vermont, and if we fall-when we fall-it’s into the hard, hard stuff. Granite and gravel. This stuff is not your friend.

The sad news that I’ll be today’s Fall Guy comes within the first minute of our very first run. Our leader today is Killington’s resident fat-tire go-devil, Jon Lamb. Jon’s in his late 40s or so, but he jumps off rocks and barrels over trees like a hormone-fueled teen. The kind of guy that his peers probably want to crowbar at the knees, just ’cause he’s always showing them up. Killington is his mountain, and today he’s guiding us on the 40-something miles of singletrack than arrow very vertically down through thick stables of trees. We’re also with Tom Horrocks, who works for the mountain’s publicity department and has a stable of bikes in his garage-Tom races professionally. Front-runners both. Fair enough.

Of the other two guys I’m here with, one grew up biking in Vermont, and is light on his pedals… a decent rider. The other is a Brooklynite who is doing pretty okay despite being born with city concrete in his veins. Then there’s me-and I’ve got a fine cloud of dust settling upon me, a sharp pain in my elbow, and the beginning of a bloody knee. It’s been only moments since we rode up to the top of the hill in Killington’s gondola, mounted up on our heavy Kona full-suspension mountain bikes, and started down the gravel-and-shale service road that serves as the main conduit to all those singletrack arteries. Technically we hadn’t even started biking yet, and in the first corner I leaned a bit too hard, turned the handles too much and-crackouchbash.

I’m back up and on my bike as fast as possible as if I can dodge embarrassment, but it’s already done. Today’s pecking order has been designated. 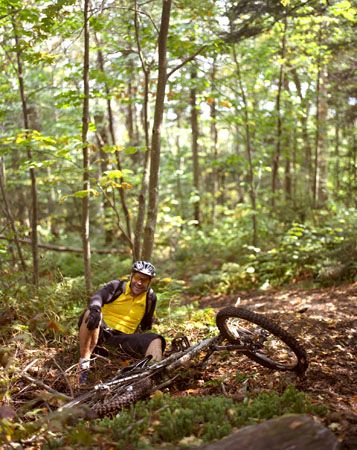 We all know the history of fat-tire biking: That it was born in the West, and grew through its adolescence in ski towns like Telluride and the high desert sandstone rocks of Moab. Suspensions took root on titanium frames-yada yada. At some point in the mid 1990s, though, a number of riders decided to cut out all the workman uphill for the  (very ski-like) adrenaline of simple downhill. A few mountains abetted the cause-stashing bikes on their lifts in the summer, and a new sport was born. It’s since become a firm subset of the fat-tire community. Bikes with sturdy full suspensions, limited gearing, and frames more rigid than a Ford F-150 are de rigeur. You’ll find the niche blossoming from resorts in British Columbia, Colorado, Canadian Rockies, and Oregon. Resorts in the East, where the season is often short and the snowfall erratic, particuarly see a chance to raise yearlong revenue. In Vermont, Killington, Mt. Snow, Plattekill and others have joined up, creating their own programs and trails.

Let’s dispense with a common misconception-you won’t, in fact, be riding down the same trails as you’d shush down on skis. Too steep, it’s bad for the mountain, and the deep depressions where the snow-making pipes lay (usually hidden in the weeds) would send you tumbling badly. Rather the resorts develop runs specifically for biking, utilizing logging and service roads, cutting and shoring up paths through trees. Then they name ‘em and mark ‘em green-though-double black.

The resorts charge a lift fee (somewhere in the $40 range), and rent out bikes. There’s a lot to be said about using one of those guys’ bikes, too-chances are the sweet little number you tool around the dirt roads back home is just not up to the frame-splintering, gravity-battering job. Besides, when you do wreck the damn thing, it’s their problem, not yours.

There’s one other interesting twist to the sport, as I’m about to discover. As I collect my diginity and padal hard to catch up to the group, a terrible racket blows up behind us, and a crew of six or so guys scream down the trail, barely touching the ground.

You can’t see their faces. In fact you can’t see any part of their bodies at all: They look nothing so much as Teenage Nijna Mutant Turtles-wearing full face helmets, and armor on their shins, pelvises, knees, elbows, breastplates. All covered in black plastic plating and padding. There is even articulating armor that runs along their spines. (I’ll discover that these are called pressure suits.) It’s a nasty irony: While resorts don’t  rent this type of safety equipment (“It would get bloody and stuff,” says a worker at another resort, “and we’d have liability issues”), but most downhillers happily invest in it, an intresting dichotomy is presented: Those who most need the protection – complete newbies like me – don’t get it.

We follow Jon single-file through a green riot of shrubs into a whoopty-do-licious swtichback, singletrack section. A good portion of the time is out of the seat, with pedels level – you can shift your weight by putting a pedal down on the side you’re turning. When things get hairy and you’ve got to get down the rough stuff, it’s best to get your weight as far back as possible. Jon himself is full of little sayings like, “Do good or eat wood.” The singtrack is great fun, akin to skiing in the trees. Look for the spaces and not the places, indeed.

It takes a good hour to get down the run. And I’m winded. Yes, gravity does a lot of the work, but you’re up on your pedals most of the time, peddling furiously sometimes, and your fingers shreik from grabbing onto the brakes. We grab some water, and head back up. Over the next few hours, Jon will huck off a ledgelike rock, and our Vermont-reared friend will give

it a shot, too.He’ll land a bit too far forward, though, and he bails off just in time before sending the bike into a tree. Still, not bad all things considered.

I am destined to fall, though, and often. 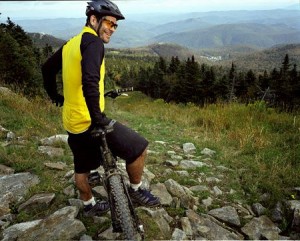 [The beginning of the day, when I was clean, unhurt, and all seemed possible.]

We’ve escaped major catasrophe-for this day anyway, and it feels time to celebrate. That night, in Killington, we have some very fine barbecue ribs and pulled pork at The Back Behind Saloon and Restaurant, off 100 South, which is run by the cook and owner, a very gregarious Conrad who looks likeyour crazy uncle and come sout of the kitchen to visit with us.

We eventually wander over to the Summitt Hotel to discover a Conecticut wedding party in full swing. I’m not sure how these things happen-perhaps we took a rock earlier in the day to the collective head-but we find ourselves embroiled in the picture taking with the bride’s mother. And then the bride, Kim. We are not dressed appropriatley. Not suprisingly the groom comes over, and we explain to Kelly we mean no harm. He invites us to drinks, “after all, it’s paid for, by me,” and we wander into the ballroom. My orange hoodie and T-shirt are unlikey not to be noticed. “Wedding crasher, wedding crasher” one grande dame trills out gleefully. I remonstrate that we’ve been invited, but, since that movies come out, people seem to take it as a bit of pride that the wedding is worth being crashed. Ah, why not?

After all, I think I finally realize: I’m too old for this. And I’ve got a full day ahead of me tomorrow. I can only hope to survive.