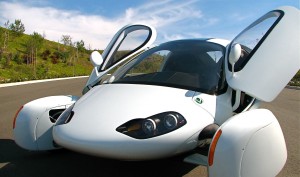 I drive new cars all the time, but two weeks ago I extended a trip to San Diego to drive something very, very new. As in you-haven’t-seen-anything-like-this-on-the-road-before new. Called the Aptera 2e, it’s the first product from a San Diego startup and the idea is ingeniously simple: Make something so light, so aerodynamic, that whatever power source you plug into it, it will go really far. (Full review of the Aptera is here.)

This baby is all electric, and you plug it in with an everyday extension cord. Even the gas-powered version they’re working on has a projected gas mileage of 100 miles per gallon.

The Aptera truly looks radical: A slipstream design with three wheels that appears more like a spaceship than a conventional car, it was funny to watch other drivers stare as me and electrical engineer Sean Touhy as we sped around the streets near Vista, California. Like they’d just spied E.T. on his floating bicycle.

Sean, like me, has a leadfoot, and he pulled out one version of the Aptera that had a single racing-style seat and five-point harness, which the company uses to test suspension settings. They’ve got an impromptu road course set up in the production parking lot (I’ve got video, which I’ll post soon), and Sean proved how stable the three-wheeled vehicle really is, by apexing through a corner at good speed. 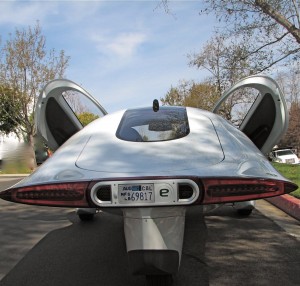 Tires screeched and he swung wide and near the far wall of the parking lot, but it was a good show of how stable the EV really is. They let me have a go at it, which I may have abused slightly, as I took about five passes around the lot, going a bit faster each time, and testing the slight understeer and surprisingly good ABS brakes.

There’s a lot of ingenuity throughout the design, from the funky gullwing style doors to the back LED tail lights, which, when turned on, light from left to right and indicate how full a charge the Aptera has.

Surprisingly I got as many negative comments from Bloomberg readers as I did positive: It’s radical enough to arouse skepticism in a lot of people (three wheels??), and it’s somewhat hard to fathom from pictures alone. In real life, however, I immediately gave a giddy laugh… there’s something so Sci-Fi about it that it rang those little-kid bells most of us still possess beneath adult-like exteriors. We still don’t have jetpacks or laser guns, but this three-wheel electric machine looks like something out of the future. 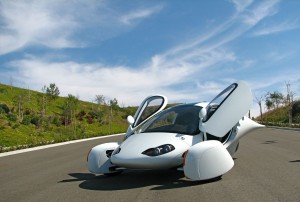 How well will it do? I don’t know. In California, where it will be sold first, the Aptera 2e will be classified as a motorcycle, due to its three wheels. (Interestingly, you won’t actually need a motorcycle license, though: As it’s fully enclosed, your regular auto license will do.) That will put a good number of people off, especially as the pricing will be at least from the mid-$20Ks to the $40s… (The difference is in the options, but I’d be surprised if the base isn’t actually in the mid-$30s when all is said and done.)

But it would be interesting if the Aptera had good sales. Making  lighter cars is a big step to better gas mileage (or range in this case), and lightness is always a hallmark of good performance.  And we should want to reward innovation like the Aptera’s… throwing out some of the old car ideas is a good step.

Besides, after my drives, I pressed the iPod-like configuration on the swinging door, and stepped out with a very sizable grin. Back to the future? Here’s hoping the Aptera does much, much better than the Delorean.