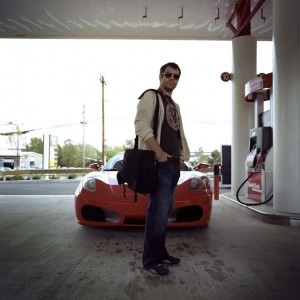 I pretty much stumbled into writing about cars when I was an editor at Gear Magazine, and they needed to somebody to edit the car section. A lucky, lucky thing. Several years ago, I wrote this piece about living out the fantasy of many a guy: Driving a Ferrari. I’ve driven lots since, but I don’t think I’ve written anything since that’s so well captured the excitement of sending a $200,000 vehicle screaming around a curve at 140 mph. How cool is it? Well, read on.

Okay, I’m a car writer. In the last seven years I’ve driven a lot of crazy-mad-cool rides, and even while hanging out with aged car-journos – who invariably smell of cracked leather seats and stale pine-tree fresheners – I can hold my own while talking cars. Okay, gear ratios and engine esoterica… no. But I can drive. And that love of driving carries me through the conversations with been-there-driven-that white-haired pedants who’ve penned a column for Car&Driver since the days of the Edsel. (Car writers are overwhelmingly old-and the kind of old who want to tell you all about what’s wrong with cars and the whole world today.)

I’ve driven exotics, souped-up race cars, tuners, the hottest-latest-newest, the AMGs/SVAs/RS’s (car speak, don’t worry about it), but I have never driven a Ferrari. Okay, I snuck in a short joyride in Guess founder George Marciano’s Scaglietti this year, but not in the way I would have liked (ie in a manner which could get me arrested). It is the one glaring omission in what is on its way to being a fine car-driving career. I mean, what kind of bullshit car writer are you if you’ve never broken 130 mph in a Ferrari, right?

Every eight-year-old boy loves Ferraris. It’s part of the arc of growing-up for any boy, which starts with toy trucks and graduates to swiping his dad’s Playboys. It just is. A poster of a Ferrari most probably graced an adolescent bedroom wall for most of us, without then fully understanding just what made it so cool. Yeah, Lamborghinis looked like an alien spacecraft, but somehow not quite right, even to our young sensibilities. Later we’d understand that the desire for a Ferrari wasn’t entirely divorced from that of the lust for a certain type of woman. Lamborghinis were the bustiere-busting platinum-haired golddigger, and Porsches, God love’em, the severe-but-sexy librarian with a secret S&M fetish-which made Ferraris the raven-haired seductress with a foreign accent, an off-the-shoulder evening gown, and a come-hither look over her shoulder.

Which all leads up to me finally getting to drive one. Last week I motored to upper Connecticut’s Lime Rock Race Track to test out Maseratis and Ferraris for a special press day. I was excited. Sorta excited, anyway. I mean, sure, it was gonna be fun, but I wasn’t eight years old anymore. That tumult of excitement had gone out with my posters of The A-Team and Paulina Porizkova.

But, no. My 32-year-old sensibility was wrong. Utterly. My eight-year-old self had it totally right when I salivated over Tom Selleck’s Ferrari 308 where it appeared every Thursday on Magnum P.I. After all, the Mustachioed One used its fire-engine-red charms to great effect while picking up hot chicks and escaping bad guys. And surprise of surprises, that sheen of glamour-danger-excitement translates to real life. Driving a Ferrari is, truly, utterly, that fucking cool.

Minutes after arriving at Lime Rock, I was strapping on an XL helmet and fitting myself into the F430. The car was red (of course), with enormous jet-like air intakes and devilish scoops. Tennis-shoe low-to-the-ground, it stood seven-foot wide, a something-wicked-this-way-comes machine. I hadn’t been on this racetrack in several years, didn’t remember its turns or apexes, but with a remarkably calm mechanic/Ferrari-nanny sitting next to me, I threw the 483-horses into full gallop, leaving the paddock with a bark of the tires. Lime Rock is a short twisty track, and my first time around was relatively tentative. Ferrari only makes 1,400 F430s a year, with a pricetag of $185,000 (which in hindsight is kinda cheap). I once crashed another manufacturer’s high-priced car (long story)… and they tend to look down on that sort of thing.

If the V8 engine is the F430’s id, the enormous ceramic brakes functions as superego, every bit as forceful and important. On my second lap I was diving full force into an ugly C curve and waiting until that last possible moment to give the brake discs the full flat-foot stomp. That sudden-stop power is unimaginable in a Honda world-you’re only feet away from the edge of the curve thundering at 100 miles an hour (a sure crash) and then suddenly you’re not-Newton’s laws have fucked off and your brain is slopping up against the front of your skull with the sudden deceleration. The car, however, is going slow enough to easily negotiate the curve and then you’ve already downshifted and are stomping equally hard on the gas.

Then it was over. Two laps. All the track time allotted. Game over.

I drove the Maserati next. Let’s just say it’s a fine automobile with many things to acquit it. Being a Ferrari is not one of them. I wanted my F430 back.

But… ah, thank ye Gods, for the Ferrari wrangler who had invited me to this press event also secured me 45 minutes of rare seat time in the afternoon to test out the F430 on the green-ringed, narrow roads of backcountry, bucolic Connecticut. Josh, a freelancer-buddy of mine (also overly familiar with waiting for checks) rode shotgun; it was agreed we’d trade halfway through.

At this point I had time to actually peruse the finer points of the car. The engine sits behind the driver and co-driver, encased in a glass shell so that it can be seen from outside. Function as art. The interior was margerine-colored leather, fine stitching, and simplicity. The stereo was a tinny unit, the merest of afterthoughts. It is the steering wheel which dominates, with a red starter button on one side and the yellow-encased rearing stallion bulls-eyeing the center. The Cavallini logo is recognizable from the thousands of cheesy guys who wear it on the back of polyester jackets. Emblazoned on the wheel, though, a bravura challenge, it looks powerful, perfect, compelling.

I started up the car and a shock of fierce energy rippled through the aluminum skin. But the true power of this machine comes to you through the auditory senses. Step hard on the gas and the sound… the sound is cracking bones, a conquering army’s battle drums, a shelf of glasses shattering simultaneously, the first sheath of snow breaking away from the mountain in an avalanche…. it is THE sound of you suddenly paying attention. The kind of primality which brings a surge of fight-or-flight to the subconscious mind.

I eased out of the race-park grounds, and turned onto a public road. I’m obsessed with great roads. This was a good one. A nice curly-cue sheath of asphalt, no shoulder, stoplights, or guardrails, swish-swooping through woods and with little to no traffic. And then I dropped the hammer. The F430 races from 0 to 60 in the time it takes you to fasten a single button on your shirt. The tree-lined scenery quickly blurred into streaks of Monet spatters.

The F430 I was driving has no clutch or stick shift. Rather it employs F1 style shifters just behind the steering wheel, which lend a bit of a video-game sense to driving-pull on the right paddle with a finger and it shifts up to the next gear; a pull on the left paddle shifts down, and the rest is taken care of. It gives the control of a manual with none of the skill required. This makes it almost too easy to drive. In fact, in traffic the monster feels deceptively docile, like playing with a sleepy-eyed circus bear. Your mom could drive it. Really.

No docility in my 45 minutes of driving nirvana. I soon had the tachometer strayed into the vicinity of 8,000 rpms, with the engine chainsawing loudly, and I urged the back end to slide out just a little bit as I took the a steep corner waaaaay to fast, but no… no… it hung in there without any queasy shudder or even an imbalance, the tires embracing the road with wide rubbery arms. After a couple of miles I was blocked by traffic-damn you minivans of the world!-and I U-turned and ran along the narrow road again, challenging the corner harder this time. And again. And again. And again. The Ferrari gave no quarter. It kicked the shit out of that corner.

It was, unquestionably, one of the fastest cars I’d ever driven. And one of the easiest to actually drive-a far cry from the half-million-dollar Porsche Carrera GT I’d raced last year in Toronto which handled like God himself and was scary fast, but was also nigh impossible to get moving out of first gear without stalling. Which I did a number of times to my shame, as a famous racecar driver was sitting next to me covertly rolling his eyes. No, the Ferrari had all the chops, but none of the disdain for amateurs. For this reason, it is a dangerous car. It whispers to you of greatness-your’s-and if you believe the hype it’d be easy, as Josh pointed out, to be like one of those pro sports types who’ve wrapped their’s around hard, immovable objects.

Speaking of Josh, it was his turn to drive, even though he politely hadn’t pointed this fact out. And so, sadly, a reluctance of Bilbo turning over his ring… I did. Josh did his own series of hard fast runs over our impromptu racecourse, enjoying as much as I did.

On the way back to track, our time up, Josh sent the car into the road with a screech from a three-way stop sign. As we burned down the small road, he slowed for a car in front of us.

Then we saw the cop. Waiting. Josh quickly dialed it down. But the screaming red Ferrari… hard to miss. Barney Fife let us pass. Then slowly pulled out. Twenty seconds. Thirty. Josh and I looked at each other. Then, the cat finally swatting the mouse, Barney flashed his red-and-whites. Seventy five in a forty-five, he said. I had the smart-ass urge to blurt out that, man, he should have seen us a few minutes earlier. I didn’t think Josh would see the humor, though.

The cop told Josh that he was cutting him a break. Yep, getting a ticket, but at a smaller speed that wouldn’t compel an automatic court appearance. The tally: $185.

Yet, somehow, it seemed right. Even Josh admitted it. A speeding ticket in a Ferrari-there’s a kind of synchronicity, even if it is a bit obvious. Otherwise it would be like getting in a knife fight without even a knick-the story just isn’t as complete.

So, yeah. Driving a Ferrari really was every bit as cool as you’d hoped as a kid. Even if those eight-year-old dreams of becoming Han Solo or a guitar god hasn’t worked out as you thought it would, well, this is one of those few delicious treats that delivers just as sweetly into adulthood. Every guy who played with toy trucks and swiped his dad’s Playboys should put it back on his life list of Must Do’s. The story will be good.

It’s even better if you don’t actually have to pay the ticket.