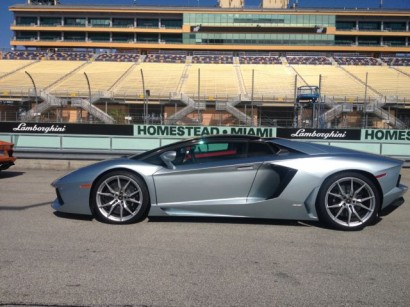 Let’s play a game of pretend. Let’s pretend that the dude who’s able to drop a half-mill-something for the top-of-the-range, screw-sanity Lamborghini Aventador Roadster actually cares about how it drives — about throttle tip-in, the ministrations of the differential, how strenuously the back end wiggles under brain-pan-smushing decelerations. Let’s pretend that he won’t drop $445,300 (and maybe $70K in options) and head straight for South Beach to see how many halter-top-wearing hotties he can cram into the leather passenger seat before Miami’s vice squad takes notice. Lamborghini launched the topless version of the Aventador in — claro que si! — South Beach. Italians have never been afraid to embrace cliche, especially when it’s working for them, and under the vast umbrella of the VW Group, Lamborghini is doing quite well indeed, thank you. The headed-for-pasture Gallardo was its bestselling model ever, and more than 1200 examples of the Aventador can be found bedazzling locals from Boston to Beijing.