Call it the greatest supercar you’ve never heard of. Experience this ethereal bullet and you’ll ask yourself, “Bugatti what? Ferrari who?” But only if you can pony up the $666,666 and get on the invite list.

But I’m getting ahead of myself.

Several weeks ago, I received a golden ticket in the mail, requesting my presence at the famous Shqiponja racetrack in Albania, just outside the capital of Tirana. The only other identifier on the invite was a silhouette of a low-slung sports car, impossible to identify, but obviously sexier than Angelina Jolie.

Intrigued, I booked my ticket through the anonymous 1-800 number on the invite — the still unknown company’s PR team/concierge service.

This morning I was met by on the tarmac by a S500 sedan, black as a stallion, with frosted-out windows. The back door opened, and I met the man — the visionary behind the most extraordinary car in the world. 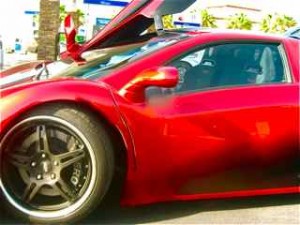 The only snap shot I was able to sneak of the fabled Fab-Veloce CPA-MMTL 16W.

Few have actually met Fabio Veloce der Maschine. Heck, in the industry he’s like Kaiser Soze — alluded to, rumored about. A top member of a high-powered PR team, who also worked for Princess Diana, supposedly spent six months as der Maschine’s attaché, but will only talk about it when he’s topped up with several bottles of vintage Perrier-Jouët.

Thin, tall, with an angular face and Montezemolo-tousled hair, wearing a perfectly cinched silk tie that Winkelmann could only hope to achieve, der Maschine did not even say hello. “Before we begin,” he intoned in heavily accented mélange of Italian and German, “sign this.” A non-disclosure agreement. “Break the embargo, and you’ll never be seen from again.”

We were on our way to the track, and I soon discovered that der Maschine has little patience for small talk. He gets straight to the point. “Ron Dennis, Henrik Fisker, Dr. Bez… these are boys playing at making cars. This Elron character…”

Der Maschine makes a fluttering gesture. “Dust in the wind.”

Well, ego is still a healthy thing in the auto world. I asked der Maschine to tell me about himself. “I began my career with Ferrari and the F1 program, before moving to Audi. You do realize that I created all-wheel-drive, do you not?”

Der Maschine then tells me of his wayward career, briefly working for storied companies as varied as Pagani, Saleen, Gumpert, SSC, and leaving bits of his “magic” on such models as the Cizeta-Moroder V16T, the Cerbera Speed 12 and Tramontana R. “My legacy is found throughout the car world. If it wasn’t for me, the Gillet Vertigo would never have existed!”

Wow. The guy is a legend.

I ask him about green technology. “Journalists are huge douchebags,” he mutters. Then, louder: “Green cars like the Volt are for idiots. You can quote me on that.”

But then time for talk is over. We have arrived.

The car is already on the track, but covered by a sheet. Two comely assistants, wearing spangly bathing suits, hold each corner.

Jesus. No, I mean really. If the iPhone changed the cell phone world and was branded the “Jesus phone,” this thing is the Jesus Car.

It looks like nothing I have ever seen. (At this point, let me apologize for the lack of clear photos — my cell phone and camera were confiscated by der Maschine’s people. He promised me I would receive a press pack complete with photos, “as soon as our people get it shot professionally.” I’m still waiting.)

Painted “forget Ferrari red,” the CPA-MMTL 16W is only 39 inches high (“We’ve bettered the GT40,” der Maschine says), 183.9 inches long (“we benchmarked the GT-R”) with overhangs 6 mm less than the Veyron’s. Its proportions are “Birth of Venus”-Botticelli perfect.

Nor is it the kind of overdone supercar with wings that have wings. Imagine the Lamborghini Miura, but better. Take the Miura, mate it with the Alfa Romeo 8C Competizone, and you begin to get the idea.

Other details abound: The fascia reveals something akin to the 458 Italia’s front winglets (“they deform more quickly”); the rear has the Lexus LFA’s quad tailpipes (“All four actually work”), and a rear spoiler deploys at 27 miles per hour. (“Why wait until 60?”)

Stunning. Says der Maschine: “I designed it myself, on a napkin at a hotel bar.”

The specs are outrageous. The dry-sump W-16 motor (mid-engine, clearly), has four-and-three-quarters turbochargers (“an innovation you simply can’t understand without an engineering degree,” says the visionary), making 999 horsepower.  (“We didn’t want to overdo it.”) Peak torque is an astounding 1,111 pound-feet at 6,666 rpm, with a redline of 9,111. (Der Maschine, who in a rare moment admits to full-blown OCD, has a fixation with certain numbers.)

Zero to 62 is achieved in 2.8321 seconds, says dar Maschine — “Because we’ve kept the weight down. It is a mere 1,999 pounds, using a proprietary weave of Kevlar and space-age pressed particle board.”

There’s more. “It is all-wheel-drive,” he says. “Except when you don’t want it to be. The front wheels can be switched off!”

That’s not the only unheard-of innovation. The doors open in a way that I’ve never seen before. In fact, I can’t quite describe it. You touch a button and they swing upward and outward — a combination of scissor and swan— but they’re hinged on the wrong side! These are suicide style scissor/swan doors.

I must say, the mechanism is awesome, but you must remember to leap out of the way as they sweep viciously through the air, right where you tend to be standing. Best to already be wearing your helmet. Nonetheless, coolest detail… ever!

Apologies again, because I didn’t get to. “You’re not good enough,” der Maschine told me imperiously.

Excuse me? I’d flown all this way…

Well, could I at least be driven around the track by someone who was qualified?

“Also impossible. We’re still in development. In fact, I’m having second thoughts about this whole thing. This was premature. Come back in, say, August. We’ll be ready then. This interview is over.”

And with that, der Maschine jumped back into his Mercedes and left. The assistants re-covered the Jesus Car.

(It should be noted, by the way, that the moniker CPA-MMTL 16W derives from its full name: The Fabio-Veloce Corsica PanAmerica Mille Miglia Transverse-Longitude 16 W. One of the assistants mentioned that the S model should be out later in the year.)

However, having seen it in the particle-board flesh, I do not doubt that the CPA-MMTL 16W is the greatest car ever built. The auto world should prepare itself now: Come August, the name Fabio Veloce der Maschine will be on all of our lips. Just remember — you heard it here first.

Epilogue: Can someone please Google Fab-Veloce’s PR people and e-mail me their info? Not wanting to be scooped by a blog, I’m filing this from the Tirana airport, but the agent at Albanian Air says she can’t find my return ticket in the system. There must be some mix-up.