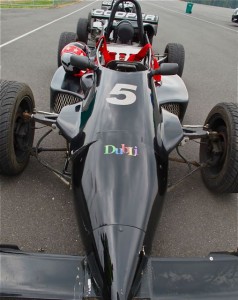 Yesterday, I got a mix of my two favorite things — New Mexico and racing. Al Unser Jr., the ex Indy racer from Albuquerque, and his son (also Al), came out to the East Coast to conduct a speed clinic driving open-wheel cars.

ABOVE: Video of a lap around NJ Motorsports in the Forula 2000

The one-day school was for charity — Unser is supporting research on paralysis, a subject close to his heart since his daughter became a paraplegic, he says, due to a spinal virus. The benefit was the first of its kind under the Unser aegis.

I’ve done a lot of racetrack driving this year (this was my 14th day so far), and so I was feeling pretty good. But these were Formula cars — open-wheel, Indy-style racers. You basically have to crawl into the damn things, your lower body disappearing completely, and you’ve got to find the pedals by feel. Gears are achieved by heel-toe shifts because the gears aren’t sequential, which can be tricky, especially when you’re worried about staying on track.

But… it was thrilling. Seriously, stupidly thrilling. Some of the best times I’ve had in a car, or on a track, in a while. The amount of grip is just astounding. We were driving on the Lightning track at New Jersey Mortorsports — a place I’ve come to really like. It’s fast-fast-fast out there, but you can charge through the first set of esses at speeds I couldn’t imagine using other cars. And I’ve driven 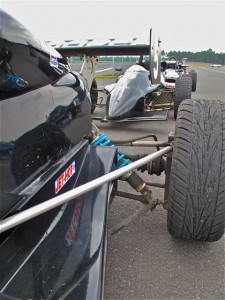 this track in a $400 Lexus LFA, Porsche Panamera Turbo, Ariel Atom and M3.

Down the long front stretch, where I was hitting the rev limiter in 4th gear (the tallest gearing on the car), I was around 115 mph or 120, and the buffeting wind felt like it would tear my helmet off.

The Unser boys were gracious, but obvisouly considered the cars tragically underpowered. They’re used to much faster everything. I will be writing about the experience in greater length in an upcoming Bloomberg column. Even better, I’ll soon get to drive an actual F1 car (an old one, and probably detuned… still) this month. So I’ll have more to report. For the time being, enjoy the video. 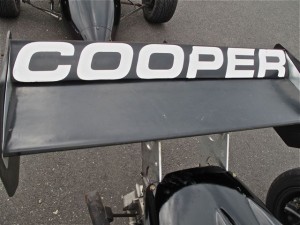