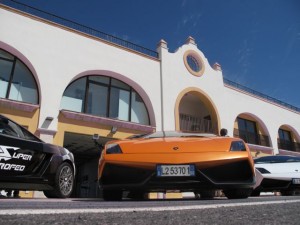 Congratulations! Your membership in the recession has expired. Throw off that sad shade of Gray Austerity which hardly becomes you. It’s time to abuse your bank account.

But what to buy? 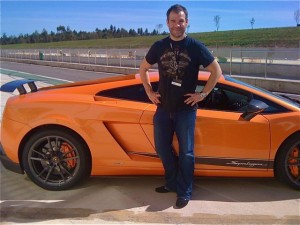 Proud owner: Okay, not so much

You might consider a diamond-encrusted Victoria’s Secret bra. Or perhaps a Greenwich mansion with a dollar-sign shaped swimming pool. Or a Lamborghini. Yes, how about a nice Lambo for the six-car garage? 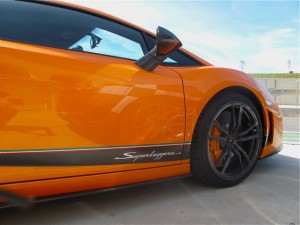 You could wait for the new version of the Murcielago supercar, called the Jota, out in a year or so. Patience probably clashes with your designer duds, though.

Instead, try the latest toy off the line in Sant’Agata Bolognese, Italy — the LP 570-4 Superleggera, a top-line version of the Gallardo coupe that was released three years ago. It’s got “super” in the name after all, a good start. 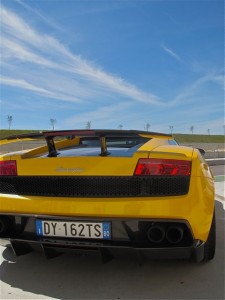 Look at them haunches

So what do you get for the extra? Ruby inlays in the steering wheel? A supermodel in the passenger seat? 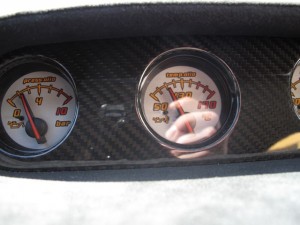 Light cars handle better and are quicker from a dead stop, but replacing steel with aluminum and carbon fiber is expensive. For the Superleggera’s premium you get sheets of weaved carbon fiber inside and out, so gorgeously sculpted you could hang one of the carbon-encased side mirrors on the wall alongside the Matisse. You’ll also find the pricy material on the rear wing and seat backs.

Not including fluids like gasoline and oil, the car weighs less than 3,000 pounds, the lightest car Lamborghini makes. 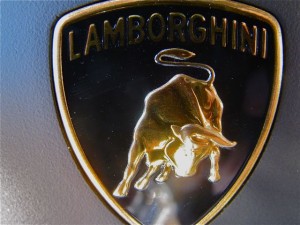 Yet that strict diet also means doing without creature comforts like automatic seats. And the door handles inside are leather pulls rather than metal levers. 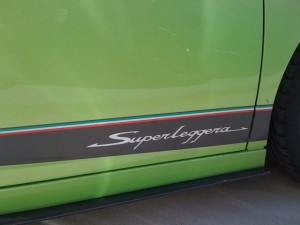 Uber Lambo: You get special badging, too

Just be glad that you still get air conditioning and auto windows.

So, this is luxury?

It is when you live in a world of bragging rights where the winner is measured in tenths of a second. The LP 570-4’s mid- mounted V-10 is up-rated to 562 horsepower, and 60 mph will show on the speedometer in about 3.3 seconds.

While you can still buy it in colors that don’t exist in nature (nuclear green for example), the Superleggera is a serious sports machine, in direct competition with the Ferrari 430 Scuderia, also a light-weight version of a popular road- going car.

Lamborghini execs are well aware of the brand’s past reputation as a favorite among urban cowboys with a penchant for thick gold-rope chains and illegal pixie powder. They are working to be taken seriously by the car cognoscenti, and the Superleggera has appeal that transcends the Miami Beach crowd.

Older Lamborghinis were mostly designed for top speed, and this one will hit 202 mph if you could only find the road. Engineers are now aiming for superior handling and cool design.

The Gallardo is undeniably exotic-looking, an atomic wedge meant to slice through air. Yet unlike older Lamborghinis such as the Diablo, it lacks the oversized wing and frivolous details. It’s more serious and much cooler.

I was only allowed to drive it on the racetrack, away from bumpy roads and traffic jams. From the moment I closed the featherweight door and tried to position myself in the tight cocoon, my senses were on high alert. I couldn’t quite get comfortable with my head brushing the roof (I’m not sure how you’d manage a helmet). The experience is more boot-camp bossing than champagne cosseting.

Then I fired up the engine, which is positioned under glass behind the driver. It sounds like a malevolent buzz saw. You might not want to live with it every day (nor might your neighbors), but in short bursts it’s glorious.

Soon I was tearing into tight corners, slithering onto the inside curbing and then going hard on the gas, allowing the car to slide to the opposite side of the track. Peals of rubber sounded like gun shots.

Like all Lamborghinis, this is all-wheel-drive, but the persistent understeer of previous models is mostly gone. Handling was spirited and predictable. The car’s lightness is abetted by a tweaked suspension, as unforgiving as a drill instructor.

My only concern was that at speeds of more than 100 mph directly into heavy braking, the back end wiggled unsettlingly, showing that the car could use more aerodynamic down-force.

Obviously this is no daily driver. And cross-country forays are out of the question. (Forget about storage space.)

Sunday drives would be nice. Racetrack days besting your friends would be better. It’s a $240,000-plus purchase that you’ll only use once in a great while. Kinda like a diamond- encrusted bra.

The 2011 Lamborghini Gallardo LP 570-4 Superleggera at a Glance