The Ferrari 458 in all its glory

The security gate snaps out of the way and I fulfill a dream: I pull a blood-red Ferrari out of the entrance of the Ferrari factory. Better, it’s the new 458 Italia, the successor to the immensely popular F430 sports car.

Almost nobody has driven the mid-engine monster, and fewer still have motored out of the same entrance where founder Enzo Ferrari himself, wearing an ill-fitting suit, arrived every morning, to be met by a dog named Dick.

Still, the village of Maranello, west of Bologna, is less romantic than I’d imagined. It is dominated by the car factory and tourism amounts to entrepreneurs selling rides in rag-tag Ferraris and pizza restaurants festooned with the Ferrari logo. 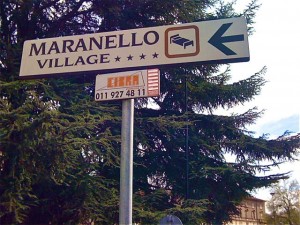 No worries, the romance is soon in full bloom as I fly into the nearby hills, the delirious sound of the 562-horespower V-8 ringing the car like a halo, causing curious locals to break cover from road-side houses.

An ancient woman gives me a sharp look — uh oh — then breaks into a smile so wide it seems to crack her face in two. 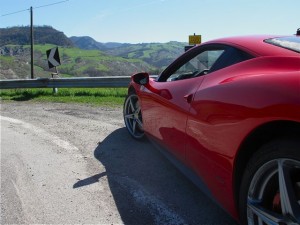 Ferrari mostly offers two types of car: front-engined, V-12 grand-tourers aimed at cross-country treks; and mid-engined V-8s destined for back roads and racetracks. The 458 coupe is the latter and will likely cost at least $220,000.

It signals a massive leap forward from the best-selling F430, thanks to technology from Formula 1 racing. The cab- forward shape, with long sloping flanks and triple exhaust pipes, was fashioned by aerodynamics rather than style. Special venting directs air through and around the car.

The list of tech marvels is as long as a congressional bill and I would go on, but I see a straightaway. 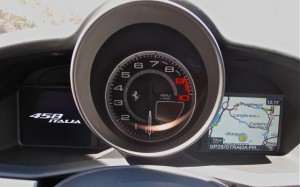 I flat-foot the gas pedal and this morning’s engineering rundown is ripped rudely from my mind. The Italian landscape breaks into jagged little pieces of color and I hastily depress the carbon-ceramic brakes to find myself manically giggling. The power and speed are absurd.

The 458 transports you to 60 mph in some 3.2 hair-burning seconds (mamma mia!), comparable to Ferrari’s limited-edition, $600,000-plus supercar, the Enzo, launched eight years ago. It goes around Ferrari’s test track in the same time as the Enzo, too.

How can this be? For one, maximum engine power is achieved at a boggling 9,000 revolutions per minute. Most cars redline at less than 7,000 rpm, so that’s the equivalent of the Dow suddenly shooting to 18,000 — it’s just not supposed to happen.

The direct-injected, dry-sump-lubricated V-8 is under glass and positioned behind the seats. The obscene howling noises that it makes at 9,000 rpm would shame a dying opera diva. 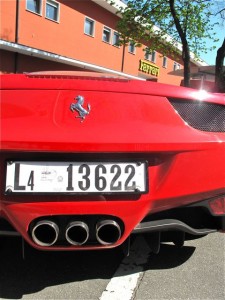 The driver can dial in the level of Jekyll versus Hyde with a five-mode system on the steering wheel, called the manettino. Choose from quiet boulevard cruising to general sport mode all the way up to Felipe Massa master.

For the slim roads outside of Maranello, I rather unwisely choose the race setting. In this mode the engine sounds insatiable even at idle, and the stability and traction control allow plenty of leeway. In other words, the electronic systems will give you enough rope to hang yourself, so you had better know what you’re doing.

I find a slithering road coiling tightly down a mountainside, complete with chickens wandering alongside. The slip sliding, tire squealing and breath holding commence. At the bottom, I decide I’ve scared myself, so turn around to give it another go.

Steering is sharper than any other car I’ve ever driven; most turns are made with a wiggle. Even hairpin corners are achieved barely moving your hands.

The seven-speed double-clutch transmission is actuated by paddle shifters behind the wheel. Fast, smooth and fun. Purists are howling, but the 458 will not, repeat not, be offered with a manual. Ferrari says it simply won’t equip such a forward- thinking machine with antiquated technology.

Another F1 cue: All of the controls, including lights and blinkers, are now found on the steering wheel itself, so you never have to take your hands off. 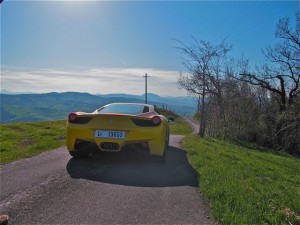 Too bad the interior is plain and without whimsy. Even the navigation screen is on the driver’s side, leaving the passenger with nothing to look at but a featureless panel and the onrushing scenery.

At day’s end, headed back to the factory, I reflect that the 458 is so far beyond the spectrum of any other car that I’ve recently driven — Lamborghinis, Mercedes and Porsches — that it’s almost alarming.

While the car itself is wonderfully compliant, under full attack corners may arrive more quickly than an average driver can process. They say it’s extremely hard to hit a 100-mile fastball thrown by a professional. Imagine if you were inside the ball.

When you put your foot into the 458 Italia, be sure you’re ready. You may find yourself going so fast you can see into the future.

The Ferrari 458 Italia at a Glance

Best features: All that technology combined with innate passion.

Worst feature: The interior is a bit dull.