Toyota Motor Corp., the same parent company that brings you the 51-mile-per-gallon Prius and $13,000 Yaris, will also be producing the LFA, a 202-miles-per-hour, gasoline-evaporating supercar that competes with the $320,000 Ferrari 599 GTB. Talk about a broad family tree.

I consider this as I walk around one of three drivable LFA prototypes in the world, currently sitting on a racetrack in southern New Jersey. The other two are in Japan and Europe.

Inside, it has leather and Alcantara, automatic seats and navigation like you’ll find on the LS 600h L executive sedan. Until now that $109,000 hybrid was the most expensive Lexus model. 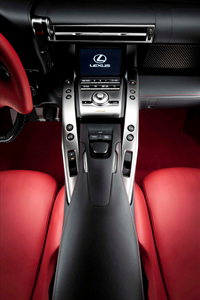 The interior of the LFA is leather, Alcantara and electronics

The LFA is no hybrid. It has beefy carbon-ceramic brakes, swollen performance tires and a 552-horsepower V-10 engine that will propel it to 60 mph in less than four seconds. Basically it’s a tarted-up racecar, and it fits into the Lexus lineup about as comfortably as a WWF wrestler at the ballet.

So-called halo cars typically showcase a company’s hottest designs and highest performance standards. The idea is that the excitement will brighten a brand’s lesser vehicles. If Dodge could make the Viper, Chrysler’s Neon was sure to rock, too, right?

Other notables in this class include the Acura NSX, Nissan GT-R and Audi R8.

Arguably, Lexus has never before had — or really needed — a halo.

“Brand cohesion doesn’t really exist at Lexus,” says Eddie Alterman, editor-in-chief of Car and Driver magazine. “The models are all over the place and don’t really have a unifying theme. It’s especially hard to draw a direct line from best-selling RX crossover to the LFA. You have to ask: What’s the trickle-down effect?”

Yet Alterman says that modern luxury brands must have a vehicle to showcase performance, as Mercedes-Benz’s AMG and BMW’s M divisions do. “You have to prove there’s substance behind all the wood, chrome and leather.” As for the LFA: “It’s astoundingly good, even at the price,” he says.

The LFA has been in development for 10 years, beginning with a “Skunk Works” team who began on their own without an explicit directive. Yet the timing of its release is hardly ideal. Lexus products are often labeled as boring, so it’s ironic that the LFA arrives amid recalls of the GX 460 SUV and HS 250h for safety issues. Consumers are hardly looking for more surprises.

The LFA is a traditional front-engine, rear-wheel-drive coupe with basic proportions similar to a Chevy Corvette. The price tag is a result of supercar-worthy construction like a carbon-fiber tub, aerodynamic underbelly and racing suspension.

Only 500 will be built over a two-year run, with production starting in December. About 175 will come to the U.S., with choices of custom interior and exterior colors. With numbers so low, you’re as likely to spot a LFA on the street as you are to see Big Foot at Starbucks.

At the racetrack, the Lexus folks seem a bit nervous.

Somebody has fired up the LFA and the engine is crackling. I’m among a small group of car journalists at New Jersey Motorsports Park, and we’ve been promised three laps each.

“Remember, there’s only one,” a representative mumbles — break it or wreck it, and the game’s over for everybody. Giving journalists a rare prototype is like lending a set of original, still-in-the-box G.I. Joe toys to a 4-year-old.

I waste no time, strapping on my helmet and getting inside. I feel like the hand in the proverbial glove: The seat is comfortable, but room is scant. Some controls are under the wheel and out of sight. You find them by feel.

I follow Scott Pruett, a professional driver who’s piloting a $59,000 Lexus IS F sports car, onto the track and as the engine revs build, the V-10 breaks into an F1-esque whine.

Steering is precise if a bit light — a fact I discover when, on my first lap, I swing out too wide and rumble onto the extreme edge of a curb (oops). Nor does it offer the constant torque and cerebellum-scrambling speed of the new Ferrari 458.

Yet it isn’t scary like certain halo cars — the Porsche Carrera GT leaps to mind. And compared to the all-wheel-drive Nissan GT-R, the LFA is a driver’s car. Though it has electronic stability and traction controls, they are only background players.

The LFA is beautifully weighted, a dancer on the balls of its feet, swiveling easily into tight corners. By the eighth lap (okay, so I snuck a few extra ones in), I feel comfortable and fast.

It took them a long time, but Lexus brings excitement — if only to a very few customers.

So, Prius and Yaris, meet your new brother. Family dinners are going to be a lot more interesting.

The Lexus LFA at a Glance

Best features: Neutral handling and the satisfying sound of the V-10.

Worst feature: Rather inelegant exterior styling, especially for a Lexus.

Target buyer: The supercar collector who’s bored with his other toys.