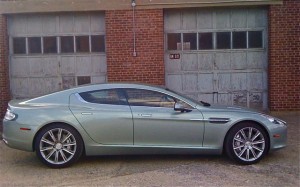 Four ways to get in: Aston Martin Rapide

There are only three $200,000 Aston Martin Rapides in the U.S., and one is sitting in the circular courtyard of Bloomberg LLC’s New York building, causing a stir.

“I’ve seen all kinds of expensive cars parked out here, but never anything like this,” says a doorman from next door.

Unlike auto-obsessed Los Angelinos, most New Yorkers are car blind except when it comes to catching taxis at dinnertime. The fact that this sedan is drawing pedestrians off the street and from the offices above speaks to something special. Something Aston Martin special.

“What the heck is that thing?” asks one onlooker. “It’s gorgeous!” 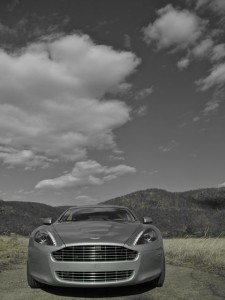 The answer is the new four-door Rapide, a sensuous supermodel which belies sedan sensibilities. Look at its overall height, the smooth-flowing roofline and characteristic Aston nose and grill, and it reads as a sports car. Chances are you won’t even notice those extra two doors.

Gathering up three passengers, I spirit up Third Avenue, with the heads of passers-by snapping around every time I give a stab of the gas pedal. The sounds of New York City are as diverse as its citizens, but the warble of a handbuilt 6.0-liter 12-cylinder engine is unique even here.

Aston’s designers are masters of line and proportion, working carefully so that no angle is jarring. The result draws the eye in a special way — even people who care nothing for cars notice.

Attention to detail is superb. Note how the Rapide’s doors open slightly upward (Aston call them “swan wings”), so they avoid curb dings. 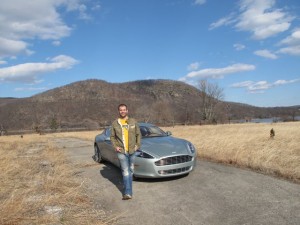 Nice day for an Aston

This must be what it feels like to be a really beautiful woman or a major sports star. Park where you like because everyone assumes you belong; acknowledge waves, catcalls and thumbs ups with a small nod of the head; feel generally pleased with you being you and them being them.

Caution: The Rapide’s door openings are actually quite small and your swelled head just might not fit. Just as all is going swimmingly my rear-seat passengers begin complaining.

The Rapides’ particular foible is its rear bucket seats. Sculptural and covered in fine leather, they’re beautiful to look at, but kinda lousy to sit on.

This conclusion is forced upon me when I reluctantly relinquish the wheel and go back there myself. Alas, these are not the thrones of gods; rather perches for cupids and court jesters. 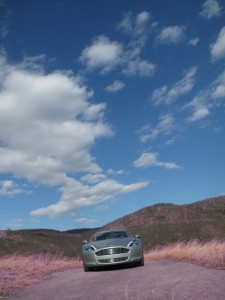 Not that they are intolerable. You can see out the front reasonably well and you don’t need to pull in your knees. There are even small TV screens. Yet the seat backs themselves don’t recline and are canted at a spine-unfriendly angle.

Really, though. It’s an Aston Martin and therefore all about the driver. So I dump my guests and flee the city so that the Rapide and I can really get to know each other.

Based on stats alone, the Rapide’s 470 horsepower is less impressive than the new Porsche Panamera Turbo’s 500 hp. The four-door, $133,000-plus Turbo makes it to 60 mph in 4 seconds, versus the Rapide’s 5 seconds, and the Porsche is a heck of a lot more comfortable in back.

Whatever. Like a Ferrari, an Aston transcends simple math and physics. It’s an experience.

Under full acceleration, the sound of the V-12 resonates in your sternum like a tuning fork. I downshift the six-speed automatic transmission just to feel the full-bore thrum.

Pushed hard into corners, the Rapide hunkers down and its 16.5 feet of length seems to shrink, the better to sling you through the apex. The massive amounts of rubber on the 20-inch Bridgestone Potenza tires certainly don’t hurt.

The transmission, equipped with magnesium paddle shifters, isn’t as slice-to-the-bone sharp as those offered in the latest Ferraris or Mercedes SLS super car, but gets the job done. The steering tightens considerably when you change to sport mode.

At highway speeds and beyond, the Rapide is as surefooted as an experienced runway model. Top speed is 188 mph (303 kph).

The interior is standard-issue Aston: If something looks like wood or metal, it is. You can choose from a variety of trims, from fine walnut to ash burl or piano black. Ten cow hides go into all that leather.

Sadly the workings of the navigation and stereo system are as incomprehensible as ever, as if designed by a drunk Englishman programming in Sanskrit. It takes me tens of minutes just to figure out how to turn the maddening thing off.

Many a would-be buyer will try to convince their spouses that the Rapide is practical. I admire their pluck. In truth the Rapide feels much more a sports car than a chauffeur mobile or thrilling family mover.

And truly competitive types will know that other, less- expensive sports sedans can outperform it.

What no competitor should do is compare to its overwhelming good looks. Trust me, you’ll learn to shrug off the quibbles and love the quirks. What else would you expect from a supermodel?

The Aston Martin Rapide at a Glance

Worst feature: The feeling in your back after riding in the rear.

Target buyer: The perfectionist looking for model-like appearance and a pro athlete’s performance.