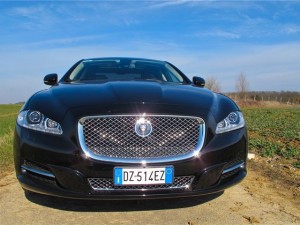 Parked on a pebbly shoulder, nose pointed down a skinny country lane, the new Jaguar XJ hums quietly in the sunshine.

I punch the dynamic sport button and the seatbelt gives a sharp tug across my chest, tightening automatically. A jolting, visceral signal between a promise and a threat. The car’s talking, and my pulse actually responded.

Did I just get excited about a Jag? 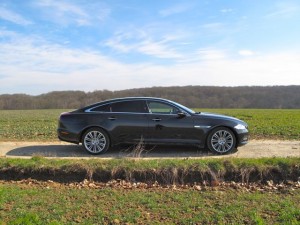 Jaguar in the countryside:Long-wheelbase 2011 XJ

While it once made gut-achingly cool cars like the XK120 and E-Type, Jaguar has long been merely a facsimile of fab. Apologies to those who still regard it as the standard-bearer of British cool, but average customers are Florida blue-hairs and Long Island podiatrists.

That goes double for the last few generations of the XJ, the fuddy-duddy sedan with roots extending from the mega-cool Mark saloons.

And suddenly, this. My 2011 test XJL is incredibly long and lean, skimmed in tuxedo black and outfitted with darkened rear windows. A panoramic glass roof floats delicately above a righteously solid body, architecture as much as car. Blessedly, there are no shiny, cheesy bits muddling up the gorgeousness. 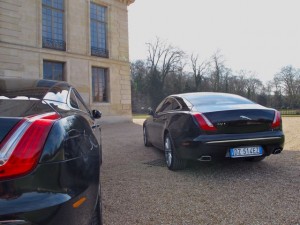 “Fast forward decades from the original 1968 XJ and this is what you would have ended up with,” said Ian Callum, Jaguar’s design director. “It’s all those years in between where it got messed up.”

The Scot, considered one of the world’s top car designers (he also worked with Aston Martin), is known for being outspoken.

Callum said his team stopped worrying so much about Jaguar tradition and concentrated on a car they would like for themselves. “Everyone’s got an opinion, but you know what? I have a few opinions of my own,” he said.

It shows. The recent XKR sports car and XF sedan come close, but the XJ earns a return to the “in” crowd. Expect to find it parked outside hip restaurants from St. Moritz to Santa Barbara, basking in that special valet sunshine.

It will be released this spring in the U.S, with prices ranging from $72,500 to the special-order XJL Supersport for $115,000. It comes with three engine variations and a short and long wheelbase.

The longer wheelbase adds as little as $3,000 to the price and weighs only fractionally more, with five inches of extra rear legroom. I can see no reason for not choosing it.

The base 5.0-liter V-8 delivers an asphalt-rendering drive which will shake loose any geriatric cobwebs. With 385 horsepower and a 0 to 60 mph charge of 5.4 seconds, it’s a willing hunter.

I stalk lesser cars on the two-lane road, picking them off like rabbits in the bush, one by one. Pop! Pop! Pop! Each disappears into the great beyond of my rear-view.

A hungry thrust is what I expect from big throaty sedans like the Maserati Quattroporte or BMW 7 Series, not a Jag. Your average podiatrist won’t know what to do with these fleet feet.

If that’s not enough, there are two supercharged versions, with 470 and 510 horses. The top-of-the-range Supersport will churn to 60 in a time-warping 4.7 seconds, yet handles meekly enough about town.

Steering is spot on, with the kind of quick turning ratio you find in smaller cars. Moderate movements of the wheel get big results.

Playing to innovation over tradition, the XJ also has a new digital display system with gauges that completely change or disappear depending on driving mode and informational needs. Definitely the wave of the future.

Fit and finish is excellent; the wood and leather are luxury grade, encouraging repeated touching. Passengers will like the rear seat legroom as much as the front, as the long wheelbase model is infinitely chauffer worthy.

If there are shortcomings, it’s the front seats, which lack the supreme bolstering of the Mercedes S-Class and the throne- like comfort of the BMW 7.

One aesthetic note: I suggest that Jag take a note from Henry Ford and offer the XJ in any color, as long as it’s black. The flat surfaces and overall structure look stunning in midnight; less so in light tones.

Who’s gonna buy this car? The aforementioned blue-hairs are always the obvious choice, but I think this XJ will drill down to younger, hipper segments. Although bigger in stature, the XJ feels sleeker and sexier than the XF sedan, and is nearly as hot as the XK sports car.

Welcome to the cool crowd, Jag.

Best feature: Stunning modernity inside and out.

Target buyer: The modernist looking for something different than the standard Mercedes, Lexus or BMW.