I’ve given up on jetpacks. Star Wars light sabers? Not, apparently, in my lifetime. And if regular air travel is any indication, space tourism will be expensive and uncomfortable. 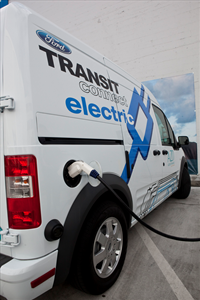 Electric!: Ford Transit Van is the future... who knew?

As for the car of the future? I’m at the wheel of one right now, and it isn’t quite what I’d imagined as an overactive 8- year-old. Rather than a Jetsons flying machine or a Batmobile with afterburner, this looks pretty much like a delivery van.

The Chevy Volt, in the flesh

I’m dodging through Manhattan in a Ford Transit Connect Electric, a light-duty van that runs on electricity. The futuristic vehicle might inspire geek-love among electrical engineers. It wouldn’t occasion a glance from an 8-year-old.

This fleet-oriented van promises to deliver 1-800-PetMeds, I’m-sorry-honey rose bouquets and Kohler bathroom fixtures around cities using nary a drop of gas. It is Ford’s first commercial electric-only vehicle, to be followed by 2012 with an EV version of the Focus.

More than a dozen years after General Motor’s release of its EV1, U.S. automakers are on course (really! truly!) to sell electric vehicles. Recently I also had a short test drive in the Chevy Volt extended-range electric car.

The Transit Electric is a joint project with Azure Dynamics Corp., which develops electric propulsion systems for commercial trucks and shuttle buses. Built to order, Ford vans without engines or gas tanks are sent to the company, where electric powertrains and lithium-ion battery packs are installed.

The regular Transit Connect gets a healthy 22 mpg city with its 2.0-liter engine. Ford says the EV version will get up to 80 miles on a full charge.

Range is always a worry; especially when you’re waiting for that new iPad to be delivered. Ford says the electric Transit is well-suited for managers of delivery fleets who know how far their vehicles travel in a day.

While the 28 kilowatt-hour battery pack doesn’t take up cargo area — it’s under the floor — the extra 600 pounds of weight does reduce cargo capacity to 1,000 pounds.

I don’t often test commercial vehicles, but the Transit’s tall, narrow silhouette enticed, and as I powered down the narrow streets in Midtown West I found it ideal for the crowded byways.

Power was smooth, getting off the line quickly enough to avoid being bullied by taxis. Plus it’s still big enough to intimidate. Turning radius was a deliveryman’s dream. A nice ride, as far as plumber-mobiles go. Price for the regular Transit is about $22,000; the EV version will be more.

If the Transit is obscure, gallons of ink have been spilled on the Chevy Volt compact sedan, which is powered by an electric motor. Chevy calls it an extended-range EV and you’ll never run out of juice if there’s a gas station around.

GM says its 16 kilowatt-hour lithium batteries will power the car for up to 40 miles. To recharge the system, you plug it in. When the battery is sucked dry while driving, a small gasoline engine kicks on to generate electricity to feed the electric motor. The gasoline engine never directly powers the wheels. GM said it gets 50 miles per gallon when running in gas mode. If so … wow.

My Volt tester was close to the version that should go on limited sale at the end of the year, for an as yet undisclosed price. (I’m guessing just under $40,000, not including the $7,500 federal tax credit.) Software tweaks are ongoing.

The exterior is hardly revolutionary. The somewhat generic shape ensures minimum air drag, but doesn’t announce itself as a game changer.

The interior is more engaging, with a dynamic display screen telling how much power (and gas) are remaining and how economically you’re driving. There’s also a nifty touch-screen on the center stack.

The coolest detail is the chunky shifter, enclosed in a hollow in the front console, which looks like an airplane throttle. That’s more like it!

I was only allowed to drive the Volt on a short, closed loop on a rather rainy day. The battery charge was already exhausted, so the electric motor was powered by the gas engine. Lack of an open road meant that I never got it over 40 mph.

I performed several hard starts and stops and the snap of torque from the electric motor made it feel sprightly up to 30 mph. Engine noise was slight, and power built smoothly.

I’ll refrain from making too many projections from my short time, but it seems to drive just as one would expect from a normal compact car.

The Volt will compete with Nissan Motor Co.’s all-electric Leaf, which has a claimed 100-mile range and a surprisingly reasonable price tag of $32,800, not including the tax credit. Once the Leaf’s batteries are depleted, it has to be recharged.

I’ve experienced the future. As an 8-year-old I would have been bored (no lasers?), but my adult avatar is enjoying sparks off electric waters.

Prices as tested: Neither have been announced.

Worst features: For the time being, Ford EVs are limited to delivery men; exterior could look hotter.