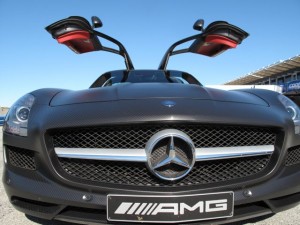 It’s got two wings and, boy, does it fly.

I’m soaring up a steep hill in Mercedes-Benz’s new $200,000 supercar, the SLS AMG. Nearing the top, I squeeze on the carbon- ceramic brakes, sweep right to left on the pebbly asphalt, then tuck the supersized beak down a coiling hill — the infamous blind corkscrew at California’s Mazda Raceway Laguna Seca.

I spiral down, stomach dropping, grin spreading. Birds on the wing indeed. 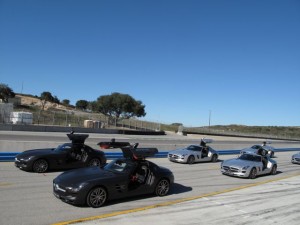 Flip: Gullwings at Laguna Seca, all ready and waiting

Like fashion designers, car companies love to dip into their pasts for inspiration (or outright appropriation). Few models make such an obvious target as the startlingly beautiful 1950s 300 SL Gullwings. Lithe autos with rounded corners and signature doors hinged at the roof, good examples will go at auction for around $500,000. 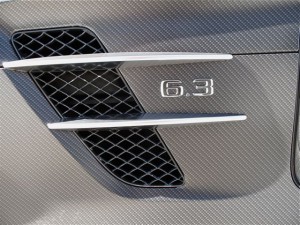 No one was surprised to see a modern interpretation from Benz, though I wish they’d simply called it a Gullwing and been done with it.

Every supercar has its own niche. A Ferrari 430 Scuderia is meant for the track, a Bentley Continental GT for Malibu. With the SLS, you could swing into Thomas Keller’s The French Laundry without a tinge of nouveau-riche embarrassment — valets will still swoon when the doors swing aloft. Yet the next morning might find you rocking around Laguna Seca at top speed. This is a supercar with class.

Mercedes’s last supercar was developed with the U.K.’s McLaren Automotive. This time they turned to their own in-house tuning arm, AMG. Based in Affalterbach, AMG modifies existing models to be lighter, faster, more powerful. This is the first time the division has designed a car from the ground up. 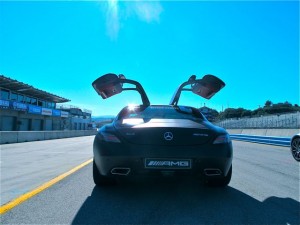 The coupe will be released this spring. Price, estimated to be under $200,000 before add-ons, is surprising. Cheap is an odd word to use here, but that sticker is commensurate with Mercedes’s own SL65 AMG convertible and vastly less expensive than the SLR McLaren’s $500,000 sticker.

With one foot in the past and another in the future, the SLS falls short of the simple beauty of its forbear. The Cyrano de Bergerac-worthy schnoz easily houses the engine, and the elongated proportions are emphasized by the vertical grill. The cockpit seems impossibly far back and side windows are small. An unmistakable profile, but the back end forms a V reminiscent of an Acura sedan — faint praise indeed. 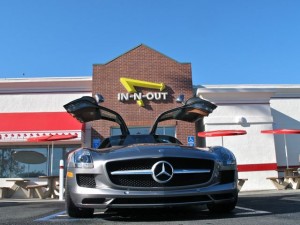 The SLS looks best when both doors are open and pointing toward the sky, almost a victory V. Too bad you can’t actually drive with it like that — it would play hell with aerodynamics at the 197 mph top speed.

A handle pops out of the door when you unlock it, a neat bit of 007 gadgetry. But be careful when exiting; I repeatedly knocked my head.

My test version was dark silver with a light tan interior and carbon-fiber accents. The inside is simple, with an all- business steering wheel that captures your thumbs for the correct driving position and a navigation screen situated front- and-center. Seats cradle and secure. 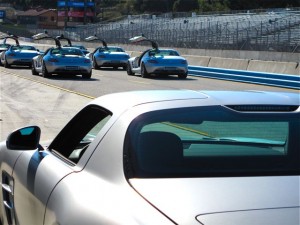 The flock: Mercedes SLS Gullwings at the Laguna Seca racetrack in California.

Power is ferocious. It’s impossible not to hear the call of the autobahn when you fire up the 6.3-liter V-8. It’s rough and rumbly but not brashly loud, emitting burbling pops and snarls as the transmission downshifts. The 563 horsepower and 479 pound-feet of torque will thrust to 60 mph in 3.8 seconds.

And oh that transmission! The seven-speed dual-clutch is a brilliant background player, intuiting your whims and needs like a psychic thing. Bring your foot off the gas and it knows whether you mean to coast through a curve or if you want to drop a gear in anticipation of unleashing extra torque. After 2 days on roads and track I wanted to buy it a Hefeweizen.

The SLS drives like a big car. The cockpit is so far back that one sights down the long hood like a gun barrel, carefully aiming down narrow roads. Still, it’s effortless enough to manage about town and the suspension compliantly soaks up bumps and divots.

Switch the driving mode to sport and that familiar, easy- riding Benz character mutates into a rowdy, hungry thing. And in sport plus, the corralled movements of the tires are really let loose, allowing for tail-wagging oversteer and rubber-screaming skids that unleash the car’s true sporting capabilities.

I negotiate the last tricky corner at Laguna Seca, sliding just so, then kick up speed on the long front straight. This is no CEO coddler: It makes demands of the driver, allowing you to determine your own fate.

A point that becomes clear as I catch up to another SLS and watch as the pilot unwisely accelerates into a descending left- hand curve and promptly spins off the track, kicking up a whirlwind of dust. I use it as an opening to blast by.

Around town the SLS handles like a dove. Out here it’s a bird of prey.

The 2011 Mercedes-Benz SLS AMG at a Glance

Best features: The spectacular transmission and yes, those doors.

Worst feature: The car looks best when the doors are open.

Target buyer: A superstar looking for a supercar with class.