Nov. 5 (Bloomberg) — That’s not a road, that’s a stream running down a steep ravine.

Make no mistake, this is Vermont, that is a road, and I’m slogging up it in a Land Rover LR4, leading a flotilla of sports utility vehicles as water burbles down sodden logs and over big, rounded boulders. Each truck has an off-road instructor aboard, which is a good thing as this is no country for amateurs. 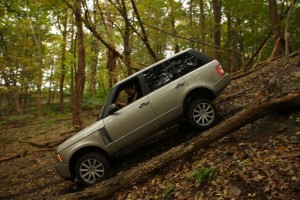 Lean-to: Sliding down the hill in a Range Rover

That Swiss-army-knife prowess comes at a price — added weight, poorer gas mileage and stickers that can run to more than $100,000, whether you’re riding the Rubicon Trail or just rolling along Rodeo Drive.

All three models crack the scale at some 5,800 pounds, so the differences among them lie in amenities and price. The “baby” of the bunch is the $48,000 LR4, which started life as the Discovery model and then the LR3. For 2010, it becomes the LR4, with extensive exterior and interior design changes and a more powerful, direct-injected, 5.0-liter V-8. 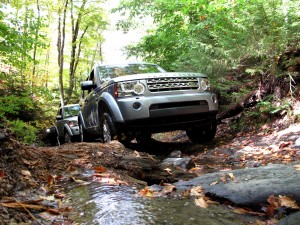 Land Rover LR4: On the hunt

The LR4 is also the most versatile of the lineup, with room for seven passengers and rear seats that fold neatly into the floor. You could use it as a work vehicle, family hauler or backwoods crawler.

The previous model looked tough and blocky, and some perceived it as less than luxurious. The grill and sides have been reworked and the effect is softer, shinier, cuddlier. I liked the old look.

But even muddy isolationists would appreciate the new interior, which gets a spiffy center column and is comfortable and tactile in a way the previous version wasn’t.

Even with 375 horsepower and 375 pound-feet of torque, the LR4 is slow. You simply can’t mitigate all that weight. Also, an issue across all models is Land Rover’s rather lazy six-speed automatic transmission, which feels a generation behind other luxury carmakers. 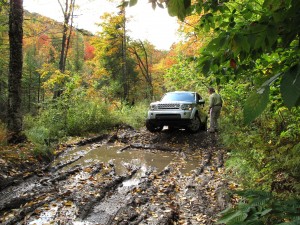 The big truck gives a super comfortable ride, and the automatic air suspension does a remarkable job of multitasking between smooth asphalt, jostling gravel and bumpalicious trails.

Off road, the beast truly comes alive. Like its big brothers, the LR4 comes with a driver-selected terrain response system, allowing you to counteract conditions like snow and mud, ruts and sand.

On that so-called “road” in Vermont, longtime Land Rover instructor Bob Burns gets out and directs me through the terrain. I barely crawl along, taking cues to balance a front wheel atop a boulder, to skirt a tree stump or romp through a deep mud pit.

Only when I get out on foot and fall into the mud do I realize just how steep and slick the track really is.

Which brings us to the midrange Sport and the top-of-the- rock Range Rover models. Both received gentle exterior and interior facelifts, updated electronics and a choice of two more-efficient engines. 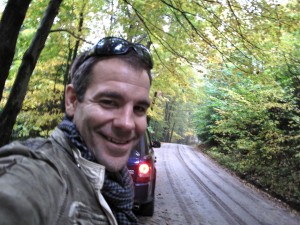 As looks go, the Sport is my favorite. With oversized tires and aggressive front air intakes, it’s like a kid’s Big Wheel toy come to life. Meanwhile the Range Rover’s proportions, with flat roof, big windows and long rear overhang, are as recognizable from afar as those of the Porsche 911. It gets further refined with new headlamps and taillights and a massaged grill.

After driving all four varieties back to back, there’s little question (okay, no question), that the supercharged engine is a lot more fun. And the gas mileage of 12 city and 18 highway doesn’t get any poorer with the supercharger. That said, I doubt Earth First! members will thank you for that fact.

The Sport handles its girth the most capably, with less body roll and able braking. (The supercharged version gets six- piston brakes versus four.) The company says the Sport will do everything off-road that the LR4 can, though the low-profile tires are more prone to punctures in the sidewalls. 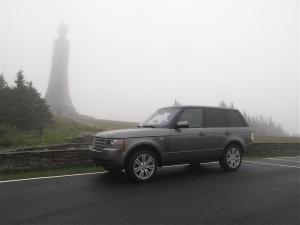 The Range Rover is the plushest of the three, and broadcasts a shoulder-rolling confidence like an aging linebacker wearing Burberry. It’s also the most difficult to corral in tight corners. It’s a big ol’ boy and it needs lots of room.

Still, I’ve seen its extraordinary chops off-road and it will manage the hills of Moab, Utah, as easily as those of Beverly.

Just promise to dip those tires in a muddy pothole once in a while.

and Range Rover at a Glance

Best feature: You can’t believe the places these big trucks can take you.

Target buyer: The driver who wants a Swiss-army-knife type of vehicle.