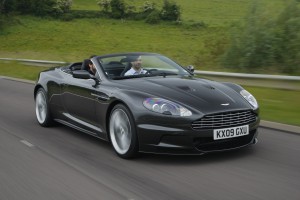 Little road, big car: The Aston Martin DBS Volante in all its glory

Sept. 3 (Bloomberg) — We all have dream lists. There are many versions, from the celebrities you’d like to sleep with, to the stocks you wish you’d bought 20 years ago. (Best of luck on either of those.)

List mania afflicts car nuts particularly. I try to keep my dream garage limited to five often-changing picks, from a Land Rover Defender 90 for off-road adventures to a vintage Porsche 911 Turbo for Sunday drives. I’d need something solely for the racetrack like a Ferrari 430 Scuderia and maybe a luxury people- hauler such as a BMW 750Li or an Audi S8.

Which leaves one space for a flashy, super-sexy sports car, meant to snap heads at stoplights whether you’re moving or not.

I’ve got a soft spot for Aston Martins and last November when I reviewed the $270,000, 510-horsepower, sex-on-wheels DBS, my imaginary stable was complete.

But what dreams may come.

On a recent visit to Aston Martin’s headquarters in Gaydon, two hours northwest of London, I had the chance to drive its brand-spanking-new convertible, the DBS Volante.

But buying a car is often an emotional choice, and that goes doubly when you’re talking about a convertible. You immediately imagine the freewheeling, wind-in-the-hair person that you could be, if only you weren’t bound in a cubicle on an interminable conference call. 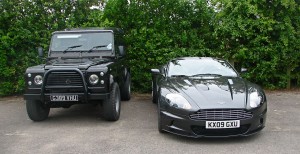 The $282,500 DBS Volante traffics in emotion. If it were a woman, you’d call it a dangerous flirt. Between the voluptuous Sophia Loren lines and the sound of the wicked V-12 engine crying out at 7,000 rpm, it’s almost unfair. Are we not mortal; do we not bleed? Give me the key!

I take the test car, a black-on-black model, onto the English countryside’s spaghetti-narrow lanes. My tester is a U.S.-appropriate left-hand-drive model, which means I’ve got to take special care on the left-side roads, especially when entering endless roundabouts. However the Brits show deference – – perhaps it’s the marque’s heritage, or maybe just the angry wail as I fly around in third gear, the V-12 keening.

The convertible has the same 510-hp front-mid-mounted engine as the regular DBS, James Bond’s ride in “Quantum of Solace.” It will shotgun you to 60 mph in a tad over four seconds. (The soft top carries a $10,000-plus premium.)

My tester has a six-speed manual and snicking through its gears feels gloriously right. An automatic with paddle-shifters is available as a $4,000 option, but the manual wins on purity points.

Top down, I follow a series of signs cautioning motorcycles to slow down — a sure marker of a good road ahead. Sure enough it wends up a long, steep hill, offering a series of fast sweepers and a sweet corkscrew. Even better, the lanes widen to a fettuccine noodle.

Good thing, because when you start to push the DBS you’ll find yourself the master of a fat band of torque and bull-like power, but you won’t dissect the road as much as tear it apart. The convertible weighs nearly 4,000 pounds and it drives like a larger, rollicking car, so a little runoff is a good thing.

After all, I don’t want to go back to Aston’s Design Center, which opened in 2007, sporting any scrapes. And ultimately, I do have to return the DBS to Gaydon.

The company, which Ford Motor Co. sold in 2007 to an investment group led by former race-car champion David Richards, is aggressively moving forward with new models. In addition to the DBS Volante, we’ll be seeing a four-door sports car, the Rapide, and the $1.7-million One-77 supercar, of which only 77 will be made.

“We design each model with a tag line,” said Marek Reichman, director of design. “The DBS’s was a tough guy in a business suit, and I don’t think we lost any of that attitude or integrity in the Volante.”

Indeed, there are no aesthetic missteps in the car’s transformation from coupe to convertible. The company decided to use a soft top rather than the now-popular folding hardtop, saving weight and maintaining its coupe-like aspect. The lid hustles down in 14 seconds.

The interior is also the same mix of soft leather, hand stitching and shiny metal. There are even tiny seats behind the front buckets, best suited for backpacks.

“We are not fashionable; we’re looking for timelessness,” said Reichman, a native of Sheffield, wearing a cool leather jacket. “We spend a lot of time seeing how light falls over surfaces, inside and out. A lot of our philosophy is understatement. You’ll find no high wings or spoilers.”

Perhaps that’s the reason the convertible has usurped the regular, ho-hum DBS in my imaginary garage. Or perhaps it’s because every list deserves one convertible.

The 2010 Aston Martin DBS Volante at a Glance

Best feature: Stunning beauty, top up or down.

Target buyer: Your dream self.