Nov. 12 (Bloomberg) — The scene: A snaking road coiled around high cliffs, with three empty lanes. The soundtrack: The incredible roar of a V-12 engine under full throttle, tires singing and 510 horses shrieking. 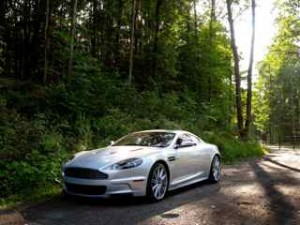 The silver $270,000 Aston Martin DBS streaks down the straightaway and through the curves, composed and powerful. It’s not a clip from a James Bond movie, but it’s about as cinematic a moment as a real person can hope for.

Ask me what it is I love about driving fast cars and I’d talk about this very moment. Ask how an automobile could be worth several hundred thousand dollars and I’ll point to the DBS.

Beautiful curves, a glorious shape and supple power make it the sexiest coupe I’ve ever driven.

The 22nd Bond film, “Quantum of Solace,” premieres on Friday and the DBS takes center stage in the opening minutes, the star of a high-speed car chase. Car lovers may want to avert their eyes: Aston Martins were harmed during the making of this movie.

You’ve got to appreciate the clever symbiotic marketing, as the association with Bond helps sell Astons, and the DBS is an archetype of the sensuous supercar we expect for Britain’s most famous spy.

Yet even film doesn’t do the DBS justice. Too often photographed from the flat front grill, you have to see it in person to appreciate the body’s beguiling composition of folds, curves, intake openings and that gorgeous back end.

The DBS is less about exoticism than perfect proportions, a happy melding of aesthetics. It’s not outre like a Lamborghini, though it’s far more interesting than a Ferrari 599 coupe. It calls attention but doesn’t demand it.

Based on the DB9 coupe, the DBS becomes Aston’s top-of-the- line performance model, and production is extremely limited — 200 a year will make it to the U.S. The price, of course, is Hollywood-size, north of $260,000.

The DBS loses the two Lilliputian back seats in the DB9, leaving just enough space for a backpack or perhaps a machine gun with extra ammo. The trunk is tiny as well, allowing maybe a single rolling suitcase and duffel.

The key fob is a futuristic hunk of metal and clear plastic that you push into a hidden hole on the center console to start the car. Once inserted, it sits flush, so you can’t tell there’s a key there at all. (This caused a moment of extreme panic on my first drive out when I momentarily thought I’d lost it somewhere.)

Yet my test car actually had problems starting. On the first try it would often cough and sputter, and I’d have to pull the key back out and give it another try. Perhaps it’s the temperamental nature of the V-12, but I’ve never had similar problems in a Rolls-Royce or even a Ferrari 612 Scaglietti.

Once it did catch, the engine would snarl to life and then settle into a rich, quivering vibrato.

An automated transmission is in the offing, though right now there’s only a six-speed manual. The heavy clutch and the 420 pound-feet of torque make it a poor around-town vehicle. I was ensnared in a two-hour traffic jam where I’d lurch forward a few feet at a time and still manage to spin the back wheels. Oops.

Yet once you’re doing what the car was meant to do — move forward quickly — it’s a wonder. The DBS soars down freeways and gobbles up winding roads with abandon. It’s the best rebuttal I’ve ever found to the maxim that money can’t buy happiness.

Weighing 3,700 pounds, it’s not exactly delicate, though it’s made of efficient materials like aluminum and carbon fiber and the carbon-ceramic disc brakes are racetrack-ready.

The electronic stability and traction-control programs are helpful but not authoritarian. Overall, the driving experience is highly engaging, especially the growl and snap of the engine as you shift hard and fast.

Then there’s that brilliant interior. My tester had Alcantara and a deep burgundy leather on almost every touchable surface, from roof to dash. The single stitching screamed out hand tailoring (the Aston is still handmade in England, as a plaque on the door sill reminds you), and the fit and finish were flawless. The seats are madly comfortable and infinitely adjustable, as good as a Bentley’s.

The only other real disappointment is the electronics — British all the way. And that’s not a good thing. The user interface of the stereo and GPS navigation system verged on maddening. Best of luck figuring it all out; I never did.

Still, that’s not what you’ll be paying attention to anyway. Leave the stereo off in favor of listening to the V-12, or perhaps the conversation of your driving partner — because all kinds of interesting people will want a ride. And maybe they’ll want to act out a few Bond fantasies of their own.

The 2009 Aston Martin DBS at a Glance

Best feature: True beauty on both the inside and out.