July 30 (Bloomberg) — Strange coincidence that when I fire up the 2008 Dodge Challenger’s snorting Hemi V-8, the 1971 Don McLean song “American Pie” blasts through the speakers. Like fashion and music, what’s old in cars will eventually be new again.

When Chrysler Corp. released the original in 1970, the situation was similar: A gas crisis loomed, and it was tardy to the big-engine party. This time, the 425-horsepower car was put into development when our irrational exuberance for power was still going strong. The Challenger and Chevy’s 2010 Camaro will be the final American neo-muscle cars for a long time. 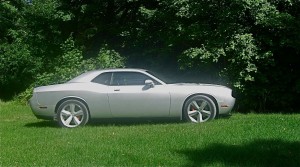 Which isn’t to say the Dodge isn’t fun. My first thought when I run a hand over it: This sucker is big and bad. Seventies- era big and bad. To own one you should have a mustache and possibly be a renegade undercover cop — or a flat-out bad guy. (Bonus points for playing either on a TV show.)

More than 16 feet long and 6 feet wide, the car is far heftier and more imposing than photos would have you believe.

The design is a throwback: Check out the narrow “bandit” grill, with four round headlamps hiding under the lip of the hood, and the tremendously long side profile that upsweeps just past the doors. The 20-inch wheels with forged-aluminum rims look as big as flying saucers.

It’s a bit sinister, and my tester is colored bright orange, screaming out “Wild Child.” The problem is it’ll likely scream out to state troopers, too.

Chrysler made only 6,400 units for 2008, all high-powered SRT8 models with 6.1-liter, Hemi V-8 engines. The entire run has five-speed automatic transmissions. The 2009 model year offers both a six-speed manual and engine variants including a V-6 model starting at about $22,000. (Chrysler says you can order a 2009 now and expect it to arrive in the fall.)

You won’t mistake the Challenger for a commuter or city car. It’s wide enough to take up an entire lane, and the turning radius is poor. I hate to think about parallel parking.

Off the line it’s only decently fast, attaining 60 miles per hour in just under 5 seconds. Once you’re in third gear and slap down the pedal, though, the reaction is like a mule kick, with the Hemi ripping and roaring in the engine bay.

While it eats up the straightaways, the Challenger also improbably glides through curves, thanks to a finely tuned suspension, a wide track and serious grip from the big tires. Unlike the Ford Mustang and its outdated (and inexpensive) live- axle platform, the Challenger gets a fully independent suspension, plus electronic stability control. And it doesn’t feel nose-heavy like a V-8 Mustang.

On long, torturous curves, like you find on some freeway on- ramps, my nerve gives out before the tire grip does. It takes a lot to get them to screech, and there’s no tire hop even on big bumps in the asphalt.

The stability-control system keeps the rear from breaking out, even when whomping on the gas and turning the wheel. That may annoy purists, but the mix of power, heft and control is nuanced and fun. On a backcountry road, you could easily outrun the bad (or good) guys.

Considering its weight of 4,100-plus pounds, the Brembo brakes bring you to a sharp and happy halt.

All of which makes me more annoyed with the five-speed automatic transmission. True, the six-speed manual is coming, and the auto can be shifted using an auto-stick by pulling it left or right. Yet it subtracts a hefty measure of old-school fun. The Challenger should be driven with a stick, preferably one topped by a pistol grip like the 1970 version I drove last year.

The interior has squared-off leather seats that I adore, both wide and yet well-bolstered, and the cabin is spacious. The company spent neither the time nor the money to do a big redesign from the Charger on which it’s based, though the gauges are simple and clean. The optional GPS navigation system and stereo controls use a touch screen and are easy to figure out.

With a base of more than $40,000 for the SRT8 model, this pony car isn’t aimed at youngsters or commuters, which may be its saving grace.

While it’s dangerous to say gas mileage is beside the point — especially when the Challenger gets 13 miles per gallon in the city — the truth is you’ll never see a bunch of them on the street. The SRT8 serves as a fantasy car for the struggling Chrysler, something to get excited about while it tries to get its act together.

Most will sit in garages, proudly kept by guys who couldn’t afford them when they were in their teens. The Challenger isn’t actually a villain — it’s just drawn that way.

Charging around in the Dodge feels slightly licentious — almost dirty — but in a delicious way. It’s a much better car than it has a right to be. If I had a spot in my imaginary garage, and the urge to grow a mustache, I would buy one.

The 2008 Dodge Challenger SRT8 at a Glance

Target buyer: The muscle-car addict who always wanted a 1970 Challenger.