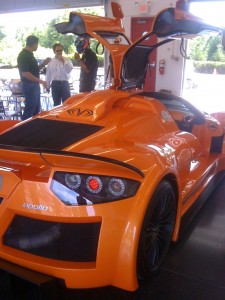 That’s obvious, but never more so than when you watch a half-million-dollar car getting towed from the racetrack into a garage where the frowning owners stand.

I wasn’t that guy, thank heaven. It was the dude right after me who lost control of the bright-orange Gumpert Apollo, helicoptering off the track and into a tire wall, cratering the nose.

Then there was the fellow just before me. He spun it but didn’t hit anything. 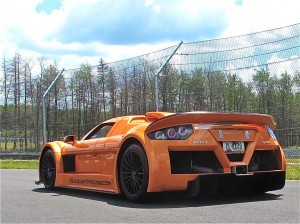 I drove about six laps in the violently powerful, German- made supercar, treating it like a pit viper with irritable bowel syndrome. Very, very delicately.

As mechanics pulled off the mangled front fascia, it seemed like a lesson: When dreaming of supercars, be careful what you dream. 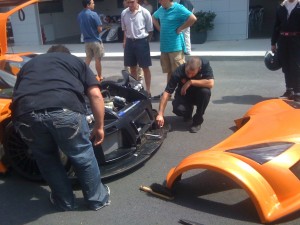 The little-known Gumpert has DNA similar to that of the Pagani Zonda, Koenigsegg CCX and SSC Ultimate Aero. All are strangely named, oddly designed supercars, with doors that open in weird ways and extraordinary price tags for cars that haven’t been around all that long.

My one drive of the $600,000-plus Aero, which is made by Shelby SuperCars of West Richland, Washington, ended with the scissor doors up by the side of a Las Vegas road, as my companion and I waited for help after the engine mysteriously died. (We suffered the pointing and laughter of passersby.)

A former Audi employee named Roland Gumpert started Gumpert Sportwagenmanufaktur GmbH in 2002, with headquarters in Altenburg, Germany. According to the U.S. distributor, about 50 have been built. 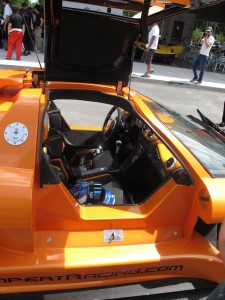 Winged: Try squeezin' in this

Who is a typical owner then? A bit unclear. After all, there are only two in the U.S., including the unsold prototype I drove.

Because the Apollo hasn’t been fitted with air bags or crash-tested in the U.S., it’s sold as a “roller,” meaning the drive train and body are shipped separately and assembled stateside. Registration laws vary by state, but you may have to register it as a kit car.

The prototype has been brought out by its U.S. distributors, Evolution Motorsports, of Tempe, Arizona, to be test-driven by prospective buyers and automotive press at Monticello Motor Club, a private membership racetrack in the Catskills. (The driver who damaged it was a “prospective.”)

“We expect to sell five a year to enthusiasts like the guys here at Monticello,” Evolution owner Todd Zuccone told me. “There’s interest from a Miami client who’ll drive it to nightclubs, but the car’s really meant for the track.”

Drive it to a nightclub? I don’t think so. The gullwing doors are cool, but when you open one you’ll find no actual seats. Just a bench and padding attached to the back of the protective cockpit. Squeezing in requires three yoga poses and the removal of the steering wheel. No joke.

Creature comforts are scant. The windows roll down and the steering column moves. There’s even a backup camera, which is handy as there’s no back window.

While unfamiliar with the sequential shifter, a transmission found only on race cars, I sensed the Apollo’s overall stability. Nearly as wide as a Hummer H2 and equipped with 19-inch tires, it’s like riding on a square mile of rubber. Lots of grip.

The engine is positioned behind the driver, so balance is ideal — as long as you don’t engage the full power of the turbos while cornering. A good rule of thumb is to make sure the wheels are straight as the whoosh of power kicks in.

Monticello is a technical racetrack with a long back straightaway where I’ve gone more than 150 mph in other sports cars. Later in the day, pro driver Schultz will take the Apollo to an indicated 202 mph. 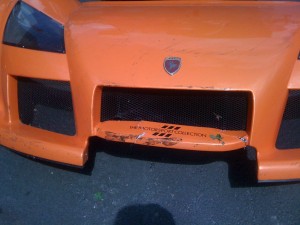 I’m not Schultz though, so I follow his directive and baby the Apollo — easy on the gas and cautious with the steering.

Even so, I reach dizzying speeds on the straight. Power comes on like a jet engine, hard and limitless. The steering is incredibly tight; I barely move my hands to turn. The very stiff brakes need a good firm push to haul us back down.

As I pit off the track, I think I’ll be able to get back out there and push harder in the afternoon.

Then the accident happens and we all stand around as the Evolution crew inspects the damage. The engine is okay and over the next couple of hours they put the nose back together.

Meanwhile, others want their chance and the line grows long. My day is over.

The Gumpert Apollo at a Glance

Super sensation: Hey, it’s only, like, half a mill…

Winged: Try squeezin’ in this