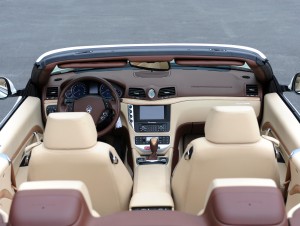 Top down: Maserati's $130,000-something GranTurismo

School’s out. Too bad we can’t say the same for work.

To my mind, the best shot at recapturing that piquant sense of summertime escape is found in a convertible.

Last week four of us jumped in a 2011 Mercedes-Benz E-Class Cabriolet ($56,850), with the ostensible goal of an afternoon hike and picnic. Dreamy grins settled on my passengers’ faces as soon as the top swept down.

Gliding through the vibrant-green tunnels formed by overhanging trees, we thrust our hands into the overhead airstream like a carnival ride. It was a perfect, humidity-free day, and marital bickering and work worries sloughed away as the wind whipped our hair.

Looking for your own open-air time machine to the fun days when you first got your license? Here’s a cheat sheet to picking the right convertible, depending on price, needs and desires.

Two or Four? Have to bring along the spouse and the parents? Then you’re pushed to slightly bigger, more staid vehicles that actually fit four humans. The aforementioned, new- for-2011 E350 convertible is kind of homely, but the front seats slide up electronically and an air foil and rear-wind deflector help minimize hair tangles. It has a soft top, which saves weight and adds cargo room in the trunk. Volkswagen’s Eos, starting at $32,400, is the rare purpose- built convertible with four seats. A handsome hunk, it has a retractable hardtop that even includes a sunroof. Powered by a turbocharged four-cylinder with 200 hp, the Eos could make an all-year daily driver.

If you’re looking for maximum room and comfort, and price isn’t an issue, Bentley’s Continental GTC ($231,000) and Azure ($225,000) are sized for LeBron. Despite massive engines, they aren’t Ferrari fast, but they are flush with low-end torque and outsized flash.

Domestic or foreign? Convertibles made in the U.S. are rare these days. If you want to buy American, you pretty much have the choice of topless muscle cars or the apple-pie classic, the Jeep Wrangler ($21,915), available with four doors, an al fresco rarity. (Somehow the dismal, $28,600 Chrysler Sebring continues to stumble on, zombie-like, infecting rental-car fleets.)

I recently made a run across the searing Nevada desert in a Corvette Grand Sport convertible ($58,580), a 430-hp speed warrior. It’s fast and tough, if a bit butch.

GM’s other mullet-sporting throwback, the Chevy Camaro, has a roof so low it feels as if you’re crouching in a bunker. The convertible should finally be released in early 2011, and will surely be a more livable, neck-stretching option. Lastly, the all-new, all-excellent Ford Mustang comes in topless versions (from $27,145 for the V-6).

City or Highway? Urbanites deserve their sun, too. Nothing fits in a tight parking spot as easily as the Smart ForTwo Cabriolet, with a roof that accordions to the rear ($17,000). Pedestrians tower over the pixie-like car, and you’ll find that half of the population will approach and strike up a conversation. It will get an updated engine, interior and exterior in 2011. What it really needs is a better, less herky- jerky transmission.

While the Mini Convertible is the other obvious choice to blitz the city ($25,000), Chrysler recently announced that the super-cute Fiat 500C will finally come our way next year and will be sold exclusively at Fiat dealerships. It has a soft top that slides along the roof rails and will give Mini a run for the subcompact with the most European panache.

Regular or Super-Fast? If you want to make your ears flap like Dumbo, the exotic car world has many answers.

If you dream of Italy, Ferrari’s $192,000 hardtop California is much prettier in real life than photos suggest, and the warble of the V-8 is glorious. Stablemate Maserati makes a convertible version of its GranTurismo. It easily seats four, and aficionados will think it costs far more than the suggested price of $135,800.

If you simply must be the fastest on the road, the braggart to end all bragging is the Bugatti Veyron Grand Sport. I’ve never driven a quicker car; it sent my head crashing into the seatback. You can’t take the removable glass top with you, so be prepared that when you park and walk away, you’re leaving your $2-million-something car open to the elements and curious passersby.

Now or Tomorrow? More exciting stuff is on its way, from the Audi R8 Spyder to, probably, a convertible Porsche Panamera.

Of course, that might mean another summer of all work and no play. I wouldn’t wish that on anybody.