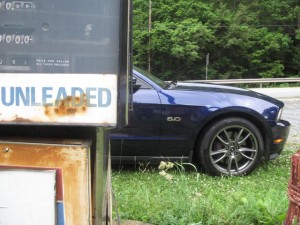 Friends: The 5.0-liter and the pump

I have a $150,000 sports car in my parking garage, a handcrafted machine produced overseas in limited numbers. Next to it, I have a U.S.-made Ford Mustang GT, armadas of which will be sold for as little as $30,500.

I tested both the day before, so which to take out today just for the thrill?

“The ‘Stang, please,” I tell Paul and Hector, my trusty garage guys. 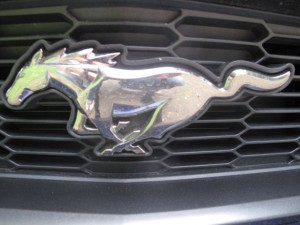 Silver Stallion: Boy does it run

Times have changed. Changed in a whopping, Big Bang kind of way. Once hopeless and bumbling, Ford Motor Co. is now slinging out the good stuff faster than Danny Meyer’s gourmet hamburger joint, the Shake Shack. And its new Mustang is about as good as it gets.

I’m reminded why as I aim the sparkling blue hood (the deep, lustrous paint is called “Kona Blue Metallic”) on my way out of town. 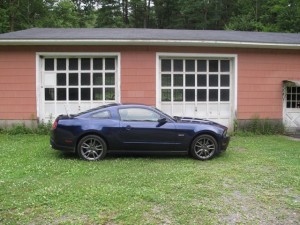 Normally I nurse high-dollar rides over the canyon-sized cracks and craters in the West Side Highway as if guiding a colicky baby in a carriage. With the Mustang’s high clearance and sturdy shocks, I bound over the choppy asphalt. Bulletproof.

On today’s just-for-fun itinerary: I’m prowling for open, winding lanes where the V-8 can have its torque-mad way with the world. Under full throttle, the brand-new 5.0-liter motor sounds like Zeus hurling thunderbolts, channeling 412 horsepower and 390 pound-feet of torque.

Years ago it was inconceivable to have so much power at such a bargain price. This base coupe has more kick than the original V-10-powered Dodge Viper or a Ferrari 360 Modena. 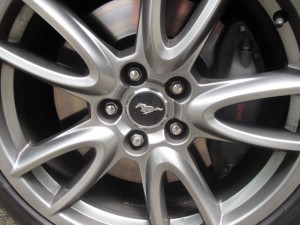 And boy does it pull. At a stop light it yanks you, inexorably, toward the next traffic stop like a leashed bull mastiff, a kind of torque overload that’s nearly impossible not to childishly indulge in over and over again.

The sound is bright, raw, delicious.

As for gas mileage, the V-8 manages 17 city and 26 highway and can be run on regular gasoline rather than premium with a slight reduction in power. 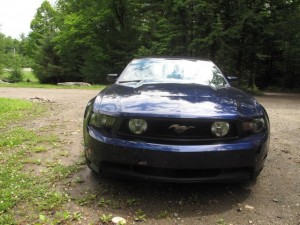 As driven, my test car was $42,305. It included most of the convenience and sport options, including navigation, improved Brembo brakes, 19-inch wheels and an electronic stability control meant for spirited driving.

So equipped, the GT was as much or more fun than any European or Japanese car at that same price.

Hard to believe that the Mustang is having its salad days all over again. Its 50th anniversary will be the pony car’s next milestone, and the last few generations have shown every long year. Liver spots have included a cranky chassis, worn-out engine and middling electronics.

It got a major refresh last year, which helped considerably, but the V-8 still produced a miserly 315 horses.

The 2011 model, also available with a V-6, is minty fresh. Nicer to look at, better to listen to and easier to live with. Most surprising, it handles competently on swoopy roads.

You see, there have always been those muscle-car motor- heads who soup up American steel just to drag race. It passes for a good time in certain towns — I should know, I grew up in one.

What those guys would never do is take a Mustang against a European sports car on a windy road. Partly because dudes who listened to Motley Crue and Judas Priest didn’t associate with those who dug Depeche Mode and the Smiths — but also because they’d get their butts kicked.

This Mustang is different. It still has an old-school live rear axle, which is cheap to produce but brutish. Yet engineers have tuned it to the point of elegance. Steady at speed and yet nimble in turns, the Mustang shows a lot of poise even on switchback roads. 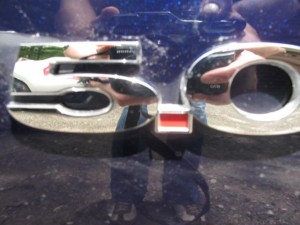 I easily sustain a super sprint up and down careening hills, the sound of the 5.0-liters blowing up around me. Even the Fourth of July wasn’t so cacophonous and lively.

While available as a six-speed automatic, let me say this: If you don’t know how to drive a stick but are thinking of buying the new Mustang, learn. The six-speed, cue-ball-tipped stick is wondrous.

Finally, the interior. Somebody has figured out that the Mustang is more than the sum of its engine and exterior. The seats are comfortable; the two rear seats are somewhat accommodating, and though the interior is mostly plastic, it looks good.

And when I get lost on my wanders, I quickly punch up my location on the optional touch-screen navigation system.

For a thriftier gas and budget point, there’s the brand-new 3.7-liter V-6, which gets up to 31 mpg highway with an auto transmission. For a base of $23,000, you still manage a prodigious 305 horses and 280 pound-feet of torque.

I’ve still got several hours before I need to be home. I don’t really have to keep driving — I’ve gotten the point — but, well, seeing as I’m already out here.

That European machine in the garage can wait.

Best features: You can find a little bit of greatness from every bit of this car.

Worst feature: Still a long way away from the magical 30- mpg mark attained by the V-6.

Target buyer: Someone who wants an American icon that flexes muscles in the right places.